[KH Explains] Undoing Moon’s policies, or going beyond them?

Though two main contenders dominate the race, four party-backed candidates are gunning for the presidency

However, there are four candidates backed by parties with a presence in the National Assembly. In addition to the two leading candidates, Sim Sang-jung of the Justice Party and Ahn Cheol-soo of the People’s Party are in the running.

Following is a close look at the four party-backed candidates’ key initiatives and perspectives. 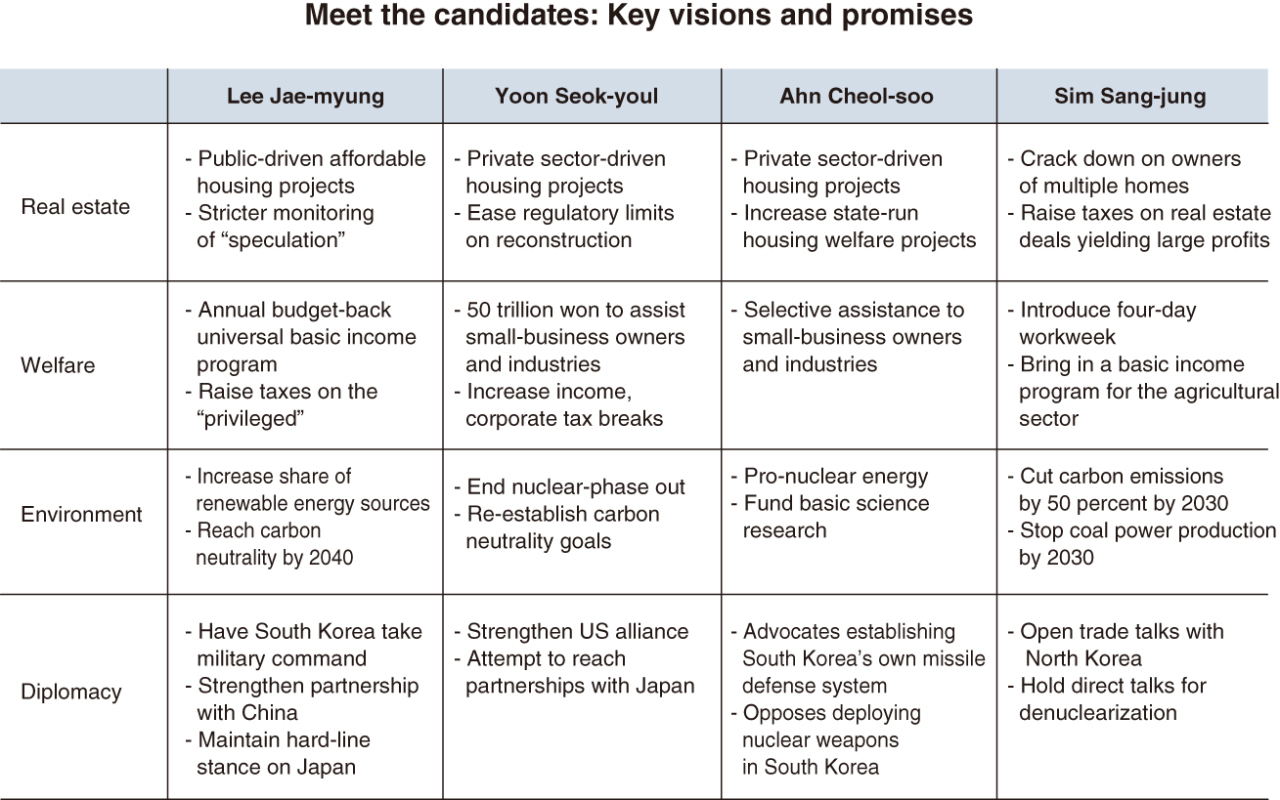 Representing the ruling Democratic Party as a politically progressive candidate, Lee Jae-myung would largely continue the Moon Jae-in administration's work while rolling out extensive reforms of the nation’s welfare and housing programs.

His policies have often been deemed too "populist" by critics, as he emphasizes an increased governmental role in economic growth, development and welfare initiatives. Lee has vowed to aggressively push for a universal basic income program while hinting at the possibility of a four-day workweek.

In his nomination speech, Lee also vowed to focus on helping the struggling economy recover from COVID-19, with an emphasis on fairness and sustainability. It is widely believed that he will increase taxes on "privileged" classes and open up more jobs and opportunities for those in low-income groups.

Lee also promises extensive reforms of housing policies in response to the public outcry against those policies laid out by the Moon Jae-in administration. He seeks to bring down real estate prices by supplying more affordable rental homes and crack down on speculation by targeting owners of multiple homes.

Lee is an outspoken man who has not shied away from blunt public comments, and his diplomatic vision reflects his personality.

In line with the liberal bloc’s long-held anti-Japanese sentiment, it is widely believed that Lee would be aggressive toward Japan and revisit the issues of wartime sexual slavery and forced labor. He is also expected to maintain closer ties with China than the United States and to prioritize talks with North Korea.

Lee has in the past called for South Korea to take the lead in its own defense, adding that the country should prepare its own defense strategies even if that meant the withdrawal of US troops from the country.

While he said he would make demands of North Korea as needed, he has so far not commented on specific issues such as denuclearization or resuming Kumgangsan tourism in the North. Not much of a change in direction could therefore be expected from a Lee government when it comes to inter-Korean relations.

Former Prosecutor General Yoon Seok-youl is a prominent anti-Moon administration figure representing the main opposition People Power Party. He too has vowed to launch extensive policy reforms based on fairness and equality.

As he is new to politics, his individual stances on issues are little known, but it appears likely that he would work to undo some of the Moon administration’s moves.

Details are still missing from Yoon’s pledges, but he has made it clear that he would ease regulatory limits on reconstruction projects to encourage developers to increase the supply of housing. He has openly emphasized that the government should “assist” the private sector in this matter rather than "drive" changes.

On welfare, he appears in line with his party in favoring selective welfare policies and asking the business community to take the lead in creating jobs and growth, with help from the government as needed. Yoon is also open to cutting taxes and lifting regulations as to encourage firms to invest and expand.

In stark contrast to his ruling party rival, the candidate is pro-nuclear energy, having vowed to abolish Moon’s nuclear phaseout plans. He would also reset the timeline and goals for the country’s transition to carbon neutrality after discussing the matter with relevant industries.

And in keeping with the traditional stance of the conservative bloc, Yoon is looking to strengthen the alliance between South Korea and the US. He would expand their military exercises and strengthen cooperation between the two countries to bolster defenses against Pyongyang.

Denuclearization is at the top of Yoon’s mind when it comes to inter-Korea relations, but he has made it clear he would not bring nuclear missiles from the US to South Korea.

He supports active participation in US efforts to maintain a dominant presence in the Asia-Pacific region. Yoon told reporters this week that he would also work to mend the "damaged" diplomatic relations between South Korea and Japan, vowing to focus on “pragmatism in concern of the benefits of the two countries.” He has not said much about Korea’s relationship with China thus far.

Ahn Cheol-soo of the minor opposition People’s Party is making his third bid for the presidency, this time armed with heavy criticism of the Moon administration.

Like the other candidates, Ahn still needs to fill in the details of his pledges, but he has emphasized economic growth through scientific advances and investment in new industries. He is drawing on his background as a physician, scientist and businessman.

Addressing the current administration’s shortcomings is likely to take up much of Ahn’s campaign strategy and can be expected to include the areas of real estate, education, labor and welfare policies. But he has been weak in terms of taking sides on issues like diplomatic relations and North Korea.

The past suggests he may not still be in the race by the time voting booths open in March. He has appeared indecisive and eventually dropped out of past races.

Just before the 2012 presidential election, he withdrew his candidacy and threw his support behind Moon. He did the same for former Seoul Mayor Park Won-soon when he ran for the mayoral seat in 2011.

Possibly the most politically progressive contender in this race, Rep. Sim Sang-jung of the minor left-wing Justice Party is all for liberal reforms. Some of her campaign promises look similar to Lee's.

She has vowed to introduce a four-day workweek and a guaranteed basic income of 300,000 won ($252) per month for workers in the agricultural and fisheries sector. She has also promised a one-time payout of 30 million won for all South Koreans when they reach 20 years of age.

The four-term lawmaker supports reducing the power of conglomerations in favor of labor unions and small and medium-sized enterprises. She also wants to apply pressure on platform tech firms through stronger anti-monopoly rules.

What makes her stand out from the crowd is her determination to continue most of the Moon administration’s real estate policies, only with greater intensity. She seeks to crack down on owners of multiple homes and apply high taxes to lucrative real estate deals.

Sim is keen for South Korea to continue working toward its goal of carbon neutrality by cutting carbon emissions by 50 percent through 2030. She also leans toward being friendly to North Korea, and seeks to invite the reclusive state to join the global economy.