Overseas students struggle back to Korea, to mixed welcome

Returning students feel safer at home, but are aware of hostility against them 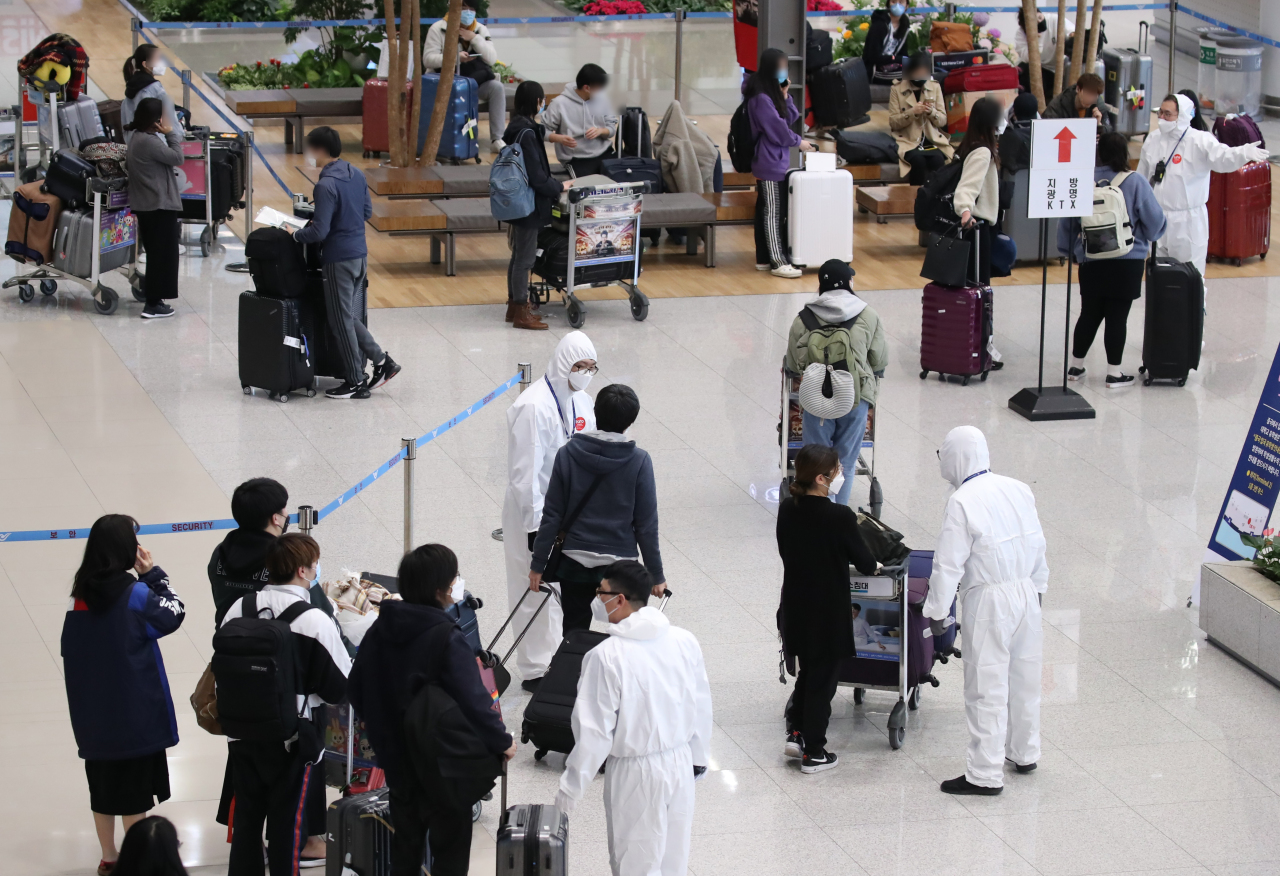 As many campuses around the US shut down and went online in response to the COVID-19 pandemic, Korean students studying in the US started returning home in large numbers, fear of the novel coronavirus accompanying them every step of the way until they reached home in Korea to be quarantined.

Students’ journeys home were strewn with many stumbling blocks, including finding seats on flights to Korea and getting to the airport.

“Since my school is in St. Louis, the closest direct flight to Korea is in Chicago. I originally planned to go there on a domestic flight with my roommate, but decided to just rent a car and drive to Chicago the day before since many domestic flights were being canceled to prevent the spread of the coronavirus,” said Kim, a Washington University senior who returned to Korea on Saturday. Kim wished to be identified by surname only.

Some students reported over 30-minute wait times on the phone to be connected with Korean Air representatives and tickets selling out as soon as they became available, despite skyrocketing prices.

Also, getting to the airport proved difficult as many forms of public transportations were unavailable or considered unsafe.

“Chicago airport didn’t have any screening for coronavirus, which surprised me,” Kim said. “Koreans and Chinese in the returning flight with me took many precautionary measures. There were some people in protective suits wearing goggles. Most people wore masks, and I felt that people went to the bathroom less than usual during the flight,” Kim added.

Upon arrival, a strict screening process awaited at Incheon Airport.

It took a sophomore at the University of Pennsylvania who arrived on Saturday some 75 minutes to exit the airport, despite being the first to get off the plane. Before, the process usually took less than an hour, sometimes less than 30 minutes.

“Entrants were required to fill out a Health Declaration Form and a Travel Record Declaration and install and run two applications, ‘self-assessment’ and ‘self-quarantine-safety-protection,’” the sophomore said. Prior to immigration screening, all travelers’ temperatures were taken by airport officials, he said.

“Despite how fatigued I was from the long travel, I felt tense and alert about all that was going on around me. I may have even been a bit timid knowing that we were seemingly unwelcomed by the general public,” said a student from an East Coast college who returned a week ago.

Since Friday, all arrivals from the US have been required to go into mandatory self-isolation for 14 days in response to the rising number of foreign imports of the coronavirus. Those with symptoms are tested for the virus at the airport. If the test result is negative, the passenger is sent home and required to go into a 14-day self-isolation. If the test is positive, the person is sent to a hospital or a treatment facility, depending on the severity.

On Friday, 1,294 people arrived from the US, with Korean nationals accounting for 86 percent, or 1,109, of the arrivals. Of all US arrivals, 87 showed symptoms. On Friday, 11 COVID-19 cases were confirmed related to US travel.

Students in self-isolation at home reported feeling safer back in Korea.

“I feel safer in Korea than in the US as people are more concerned about the epidemic. In Philadelphia, people not wearing masks can easily be spotted while pretty much everyone in Korea is wearing them. I am dining separately in my room and not leaving the room unless I have to go to the bathroom. It’s boring, but better safe than sorry,” said the University of Pennsylvania sophomore.

“I have to fill out the self-assessment on the app where I check if I have symptoms every day for 14 days. If I don’t, I get a message saying there will be a phone call,” said a student from a Midwest college who arrived Saturday.

Some students also recalled not feeling safe in the US due to xenophobia brought on by the viral disease.

“When I came back to school from Florida early March, I felt that people back at school avoided me because I was Asian. I was also going around wearing a mask at the time, and there was an impression that wearing a mask meant that you had the coronavirus,” said Kim of Washington University in St. Louis.

But even back home, the students feel unwelcome, sensing the sting of suspicious eyes and hostility.

“I feel like the students coming in are the new Shincheonji. The attacks on us are illogical, baseless and unscientific,” said one student.

“I’m not defending certain students who took inappropriate action. However, actions of a few students should not be used to frame and attack the whole community of students studying abroad. Most of them are returning to their homeland because their schools have asked them to leave the campuses. We had no other options and had to return home,” the student said.

Some students thought the negative perception by the public was justified.

“I’ve seen some students come back from the states and go out drinking and partying irresponsibly without quarantining themselves because they are happy to be back. Not all of us, but some misbehaving students deserve the negative view, and we as a community should shoulder the responsibility,” said one student, who was quarantining himself at home.