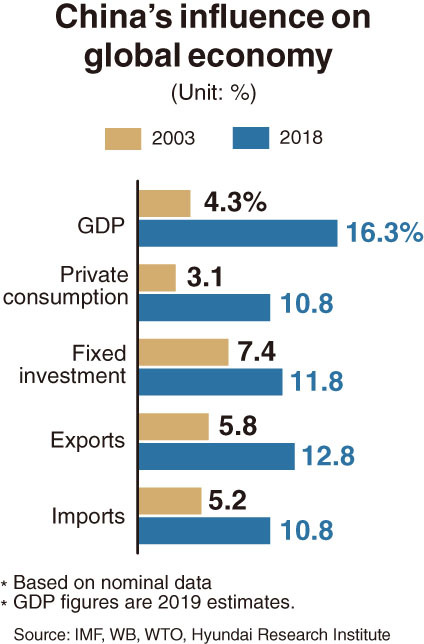 The global economy is facing its first major test this year as the on-going outbreak of the novel coronavirus (2019n-CoV) is taking a devastating toll on China, the world’s second-largest economy.

With the death toll from the outbreak soaring to more than 800 in China as of Sunday and still rising, the global economy is suffering collateral damage as the country accounts for 16.3 percent of global GDP.

“Due to the spread of the novel virus, the global economy is likely to shrink at a greater level than it did during the severe acute respiratory syndrome outbreak in 2003, which is quite troubling,” Hyundai Research Institute said last Sunday.

As the global supply chain has been crippled by the epidemic, major companies in South Korea are offering help to mitigate the impact.

Samsung Electronics said last Sunday it will provide 2.6 trillion won ($2.18 billion) worth financial support for its subcontractors who are facing difficulties in procuring parts from China.

Also, Hyundai Motor Group said last Thursday it has decided to inject 1 trillion won of funds into local small and midsized auto parts makers struggling amid low demand from automakers due to the disruption in parts supply from China.