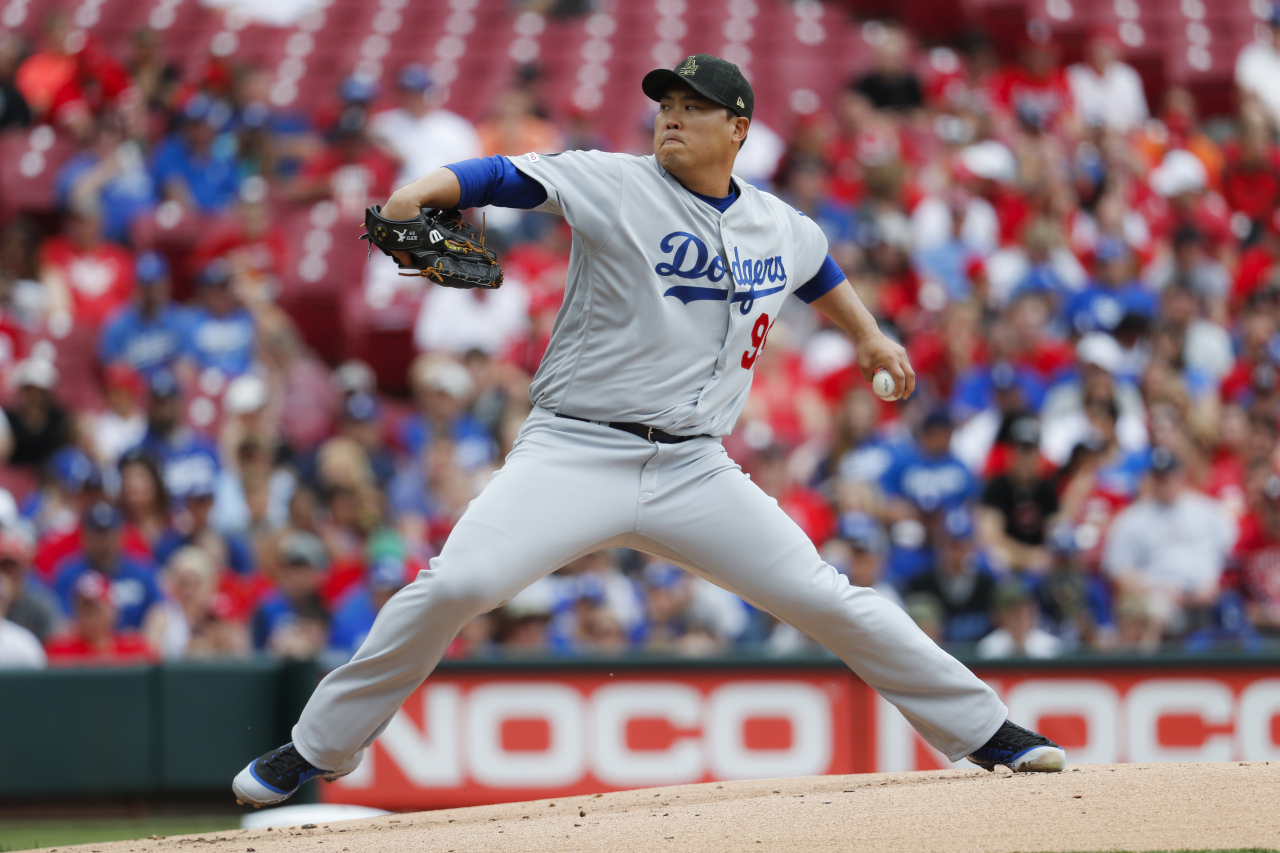 Los Angeles Dodgers starting pitcher Hyun-Jin Ryu throws in the first inning of a baseball game against the Cincinnati Reds, Sunday, May 19, 2019, in Cincinnati. (AP-Yonhap)

The South Korean left-hander improved to 6-1 for the season after shutting down the Cincinnati Reds over seven innings at Great American Ball Park in Cincinnati on Sunday (local time). Ryu scattered five hits while striking out five and walking one, as the Dodgers prevailed 8-3.

Ryu extended his scoreless streak to a career-best 31 innings and lowered his ERA from 1.72 to 1.52, currently the best in the majors. He hasn't given up a run since the first inning against the San Francisco Giants on May 1.

Ryu was coming off back-to-back gems. He tossed a complete game shutout against the Atlanta Braves on May 7 and carried a no-hitter into the eighth inning against the Washington Nationals five days later.

He has 59 strikeouts against just four walks in 59 1/3 innings, by far the best strikeout-to-walk (K/BB) ratio in the bigs.

In addition to ERA and K/BB ratio, Ryu is also tops in the majors in walks and hits per innings pitched (WHIP) with 0.74 and opponents' on-base percentage with .205. The left-hander has yet to give up a hit with runners in scoring position. The half-dozen victories put Ryu in a four-way tie for the NL lead.

Ryu, whose durability had been questioned given his history of shoulder and elbow problems, has now pitched at least seven innings in four consecutive starts.

Ryu made a career-high 116 pitches in his last start but was far more efficient in this one, needing only 88 pitches to get through seven.

The Reds threatened to end Ryu's scoreless streak in the first inning. Nick Senzel led off the game with a single off a first-pitch two-seam fastball, and two batters later, Eugenio Suarez drew a walk.

Ryu worked himself out of the jam by getting Yasiel Puig to ground out to a 4-6-3 double play.

Ryu pitched around a one-out single by Jesse Winker in the second inning. Senzel got himself into the scoring position again with one out in the third, after a single and a passed ball, but Ryu retired the next two batters to keep the Reds off the board.

He allowed one-out singles in the fourth and fifth innings, but the Reds couldn't get anything out of it.

All told, Ryu gave up a hit in each of the first five innings but didn't let anyone get past second base.

Ryu is the reigning National League (NL) Player of the Week, and he is also in contention for the NL Pitcher of the Month honors.

In his four May starts, Ryu has gone 3-0 with a 0.28 ERA, the lowest among all major league starters this month. In 32 innings in May, Ryu has struck out 26 and walked two, while limiting the opponents to 14 hits.

Former Dodger starter Park Chan-ho is the only South Korean to have earned the monthly pitching award. He did so in July 1998, when he went 4-0 in six starts with a 1.05 ERA. (Yonhap)