“The food here has no boundaries,” said Ithaca co-owner and chef Kim, 38. Kim, an avid traveler, explained how he drew from his eclectic experiences to create the menu at his third restaurant, which opened in Sinsa-dong this July.

At Ithaca, Kim uses a prolific range of spices and draws from both Mediterranean and Asian cuisine. Many of the ingredients are locally sourced.

He takes all those elements to create his idea of ideal eats, dishes “that look a bit rough around the edges at first but reveal delicate details with each bite.”

Ithaca’s dessert is a classic illustration of this approach.

The pine shoot jam, with its thick, rich consistency, its nutty yet fragrant flavor and its sharp tang at the end, really ties the dish together, pairing wonderfully with the pine nuts.

In yet another dish, shards of papadum -- a crisp, flavor-packed South Indian flatbread -- add a memorable pop of spice and salinity to peaches that have been marinated in a dressing crafted from “cheongkyul” -- a green citrus grown on Jeju Island.

Then there is Kim’s riff off of Italian pesto; instead of basil, Kim uses licorice-like Korean mint and parsley to create an intensely fragrant paste that is used to flavor a refreshing fish and clam broth.
When that broth is paired with fish, olives and sweet zucchini the combination manages to read like a fine dining dish while also channeling a homey, heartwarming vibe.

Until 8 p.m., only a prix fixe dinner course is available. From 8 p.m. and on, a la carte dishes can also be ordered.

Kim revealed plans are to continue to change up the menu, dish by dish, as certain ingredients go out of season and new ingredients become seasonally available.

Right now Kim is already planning on transitioning from plums and peaches to kabocha squash and grapes. 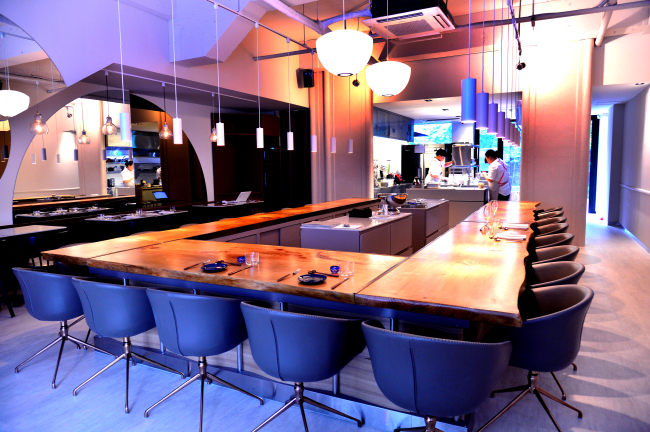