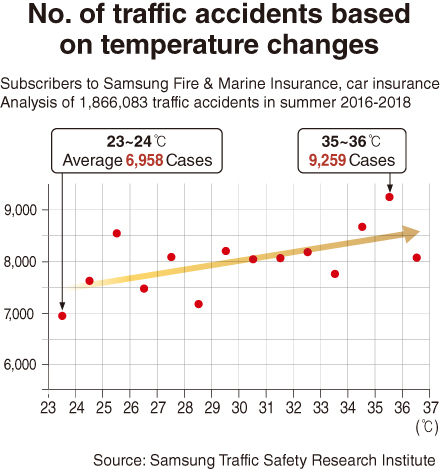 The number of traffic accidents increased by around 8 percent this summer compared to last year, a phenomenon largely attributable to a record-breaking heat wave, a report by Samsung Traffic Safety Research Institute showed.

By analyzing over 1.86 million road accidents that occurred from June to August 2016-2018 (up until July 23, 2018) that involved their car insurance subscribers, the institute said the average number of accidents soared when temperatures escalated.

The institute said that not being able to maintain normal body and abnormal rhythm in daily life such as sleep deprivation may lead to errors in reacting to various traffic situations, thus heightening risks. (khnews@heraldcorp.com)