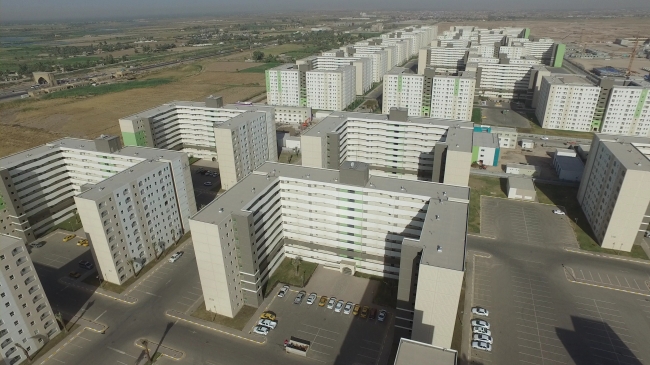 "A Town” in the new city of Bismayah, Iraq (Hanwha Engineering and Construction)
The company has been building a 1,830-hectare new city called “A Town” in Bismayah, 10 kilometers southeast of Baghdad. This is the largest single project a Korean constructor has won overseas.

The firm bagged the new town construction deal with the Iraqi government for $8 billion in May 2012. The two parties inked an additional deal to build social infrastructure for $2.1 billion won in April 2015, with the total accumulated contract surpassing $10.1 billion.

With the collected contract fees, the company was able to cover all accounts receivable, alleviating its liquidity status and improving the financial health of the company.

The Iraqi government made the payment through loans from the state-run bank after taking over the completed houses of the new city.

The prime minister vowed further full support for the construction, it added.

With construction about 30 percent completed, the company aims to build 100,000 houses and about 300 institutions, including schools, hospitals and public facilities.

The new city will consist of eight towns. So far, about 5,000 households have moved into the first town.

The company is hoping for more construction opportunities in Iraq amid the settling civil war and rebounding global oil prices.