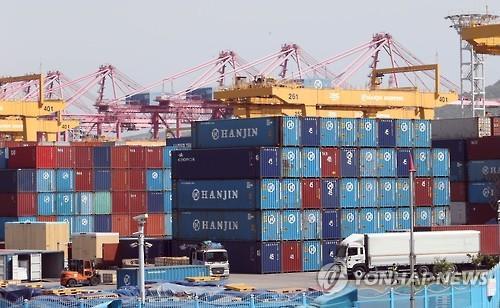 According to the Korea Maritime Institute’s report, the harbor volume of Busan Port is expected to drop by 3.5 percent from next year.

Busan Port managed containers of more than 10 million twenty-foot equivalent units last year. Of those, the Asia-North America route accounted for 36.7 percent while the Asia-Europe shipping line made up 6.7 percent. The Institute forecast that freight volume of 350,000 TEU would drop from these two lines.

Starting from April next year, the 13 shipping companies under the three global shipping alliances -- G6, Oceans 3 and CKYHE -- will be reshuffled to nine shippers under two alliances through mergers and liquidation.

“The projection is only based on the three shipping alliances, excluding the 2M+H, which has not finalized their shipping line plan. (If including the 2M+H,) the harbor volume of Busan Port will further drop,” said the report.

The world’s largest container shipping alliance 2M agreed earlier this month to have a limited partnership with Hyundai Merchant Marine for three years as 2M+H.

According to the shipping line plan of the three alliances, three shipping routes going through Busan Port will be reduced. Each route brings about 80,000 to 140,000 TEU of transshipment traffic a year.

Busan Port, the world’s sixth-largest port, has expanded business with a focus on transshipment.

By transshipment volume, Busan Port stands at No. 3, following Singapore and Hong Kong.

The port has suffered a transshipment drop since Hanjin Shipping filed for court receivership earlier this year. This is the first time transshipment freight has declined since 2009.

The growing number of direct shipments to Northern China is also posing a burden on Busan Port.

Of Busan Port’s total transshipment volume, about 66 percent has been sent to harbors in Northern China.

“Once the transshipment traffic breaks away from Busan Port, the chances to retake it is very low,” said KMI researcher Kim Gun-seop.