Saenuri lawmakers divided over how to deal with influence-peddling scandal

The ruling Saenuri Party is divided over how to deal with the fallout from the influence-peddling scandal involving a confidante of President Park Geun-hye, political pundits said Monday, with some lawmakers demanding a reshuffle of the leadership.

Around 50 lawmakers who are categorized as the so-called non-Park faction demanded the resignation of the current party leadership for their failure to properly cope with the Choi Soon-sil upheaval.

Reports showed Choi, who has known the president for some 40 years, edited presidential documents, while also allegedly exercising influence on state affairs. The purported behind-the-scenes power broker does not hold any official position in the Park administration.

"The current party leadership is responsible for failing to properly stop Choi's involvement in state affairs," Rep. Hwang Young-cheul said, adding the current leaders are incapable of properly delivering the voice of the people.

"The easiest way to stabilize state affairs now is to establish a neutral Cabinet," Hwang said, adding local parties must join efforts to set up a new system to lead the country together.

Other pro-Park lawmakers, however, criticized the opposition faction's move, adding it is now time to bring voices together rather than seeking fresh dispute. 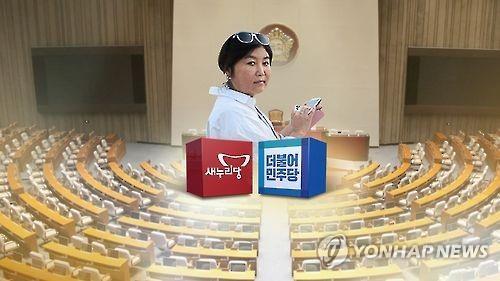 "Some are pointing fingers at each other rather than trying to find ways to join forces in such challenging times," a pro-Park lawmaker said, adding the move will only lead to further confusion within the party.

"We are currently seeking to establish a neutral Cabinet, and taking all possible measures," another lawmaker said. "If they only seek to criticize the presidential office, they should leave the party."

The main opposition Democratic Party, meanwhile, expressed objection against Saenuri's plan for a neutral Cabinet, adding there must be a thorough investigation into Choi beforehand.

"There must be an investigation to find out the truth," Rep.

Woo Sang-ho, the floor leader of the Democratic Party said. "Only after Saenuri accepts this can we trust in the sincerity of a neutral-Cabinet."

The ruling party prefers to use the existing special prosecution system under which the president can exert infleunce in selecting an independent counsel, while the main opposition has rejected that idea and has called for the introduction of a special bill to appoint an investigation team.

"Prosecutors seem to have missed a key opportunity for a thorough investigation. They don't seem to have real willingeness,"