"In line with (her direction), the president is poised to conduct a reshuffle of her secretariat soon," Jung Youn-kuk said in a statement. 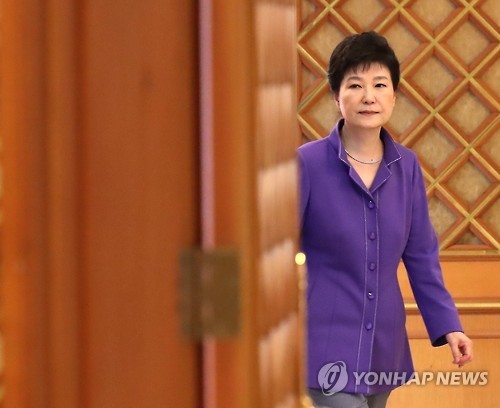 Earlier in the day, Kim Jae-won, senior presidential secretary for political affairs, told a parliamentary session that Lee Won-jong, Park's chief of staff, tendered his resignation on Wednesday, a day after the president apologized over an alleged leak of presidential speeches and documents to Choi Soon-sil.

"We are ready to do anything to change the current atmosphere and address this challenge when the time comes," Kim said.

"We (presidential secretaries) deeply regret that we have failed to properly care for the president, and that we have disappointed citizens," he added.

Kim, in addition, said that the presidential secretarial staff would "actively" cooperate with the ongoing prosecutorial investigation into the case that has plunged Park into the greatest crisis of her political career.

Choi, whose relationship with Park reportedly dates back some four decades, is suspected of having used her ties to the president to meddle in state affairs, including some related to sensitive policy issues.

The scandal, involving what critics call the "shadow president," has sent Park's approval ratings dipping to the lowest point since her inauguration in February 2013. It has also triggered calls for a sweeping personnel shakeup and prompted street rallies demanding her resignation or impeachment. (Yonhap)