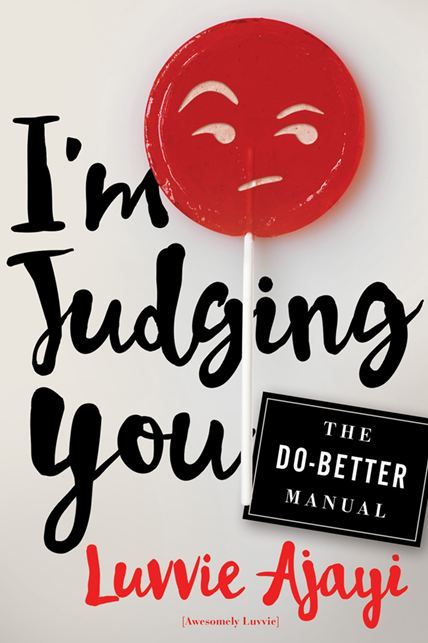 The wit of culture blogger Luvvie Ajayi (AwesomelyLuvvie.com) has earned her quite the following.

She has been called upon by the likes of McDonald’s, Comcast and wine brand Rosa Regale to take over their social media accounts, live Tweet events and blog about “Scandal” and “Being Mary Jane.”

Now comes her debut book of essays, which serves as a primer to help us improve our lives.

In “I’m Judging You: The Do-Better Manual,” Ajayi guides readers on how to interact on social media, cautioning against oversharing; laments the growth of reality television; and advises on factors to consider when debating launching a career based on a homemade sex video.

Ajayi’s unique vocabulary and phrases are employed  “stahp,” “ijot,” “alphet” and “unable to can” are her takes on “stop,” “idiot,” “outfit” and “I can’t”  and there are chuckles, “Golden Girls” references and head shaking aplenty as she opines about bad friends (some flake out on you; others are likely to get you jailed or in a fight), the ride-or-die mentality that is particularly burdensome for women, and a friend’s experiences with an issue-riddled beau (“I was actually impressed by his inability to be a well-functioning adult. It was like he was allergic to adulting.”)

But between the more lighthearted views on hygiene, grooming and relationships (“Behind every ain’t-good-for-nothing man are bedroom skills beyond measure”), Ajayi tackles rape culture, street harassment, child sexual abuse, fat shaming, intersectionality within feminism, oppression and religion, racism and the deaths of unarmed blacks at the hands of police.

Of course, certain topics don’t lend themselves to much laughter, but even heavy subjects such as colorism and skin lightening among black people get an injection of Ajayi’s signature humor.