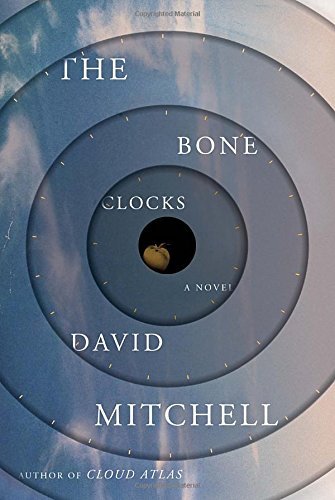 
Count on David Mitchell ― whose novels regularly suggest a Borgesian library ― to invoke one of the most famous literary labyrinths of all in “The Bone Clocks,” his extraordinary new novel:

“Half way along our journey to life’s end I found myself astray in a dark wood,” admits one of Mitchell’s protagonists ― invoking the opening of Dante’s “The Divine Comedy” to describe his midlife crisis, which prominently features the decline of his once-promising career as a novelist.

It’s all full speed ahead for Mitchell’s own incredible career, consciously referenced in yet another Mitchell novel where wandering characters from prior Mitchell novels make an appearance.

This isn’t a cute literary game, but a variation on a key theme woven through all of Mitchell’s work: We’re bound to the lives going on around us as well as before and after us, lending significance to every life and each of our decisions. We may, as the narrator concluding Mitchell’s “Cloud Atlas” (2004) acknowledges, each be a lone drop from a limitless ocean. “Yet what is any ocean,” he asks, “but a multitude of drops?”

The drop diffused through each of the six sections of “The Bone Clocks” is named Holly Sykes, a 15-year-old English runaway when she narrates the first section, set in the Orwellian year of 1984. The ensuing sections are narrated by a Cambridge undergrad in 1991, a journalist stationed in Iraq in 2004, a middle-age writer between 2015 and 2020, a transmigrating immortal in 2024 and Holly again, living in the dystopian Ireland of 2043.

Each of these six sections ― in what is Mitchell’s sixth novel ― is a riff on one of the six storylines in “Cloud Atlas.”

Each of these characters is embroiled in a long war pitting the Horologists ― a group of benevolent and transmigrating immortals like Marinus, a character from Mitchell’s “The Thousand Autumns of Jacob De Zoet” (2010) who is currently inhabiting his 36th body ― against evil, wannabe immortals. In another echo from “Thousand Autumns,” these human predators drink the blood of murdered innocents so they themselves can live on. Various characters, including Holly, encounter or cross over to the dark side.

If some of this makes your eyes glaze over ― mine occasionally did, as I tried to keep up during portions of the fifth section, in which the fantastical elements are particularly prominent ― you aren’t alone. Holly herself recalls one pitched battle by admitting that “if I ever described what I saw, it’d sound like attention-seeking, insanity, or a bad trip.” (MCT)