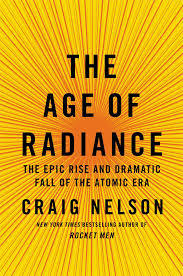 The Age of Radiance: The Epic Rise and Dramatic Fall of the Atomic Era
By Craig Nelson
(Scribner)

There are few more mysterious and dangerous men in modern history than German nuclear scientist Werner Heisenberg, the man who could have given Adolf Hitler a nuclear bomb. That’s the joke behind the Heisenberg nickname for the mysterious science teacher/maniac meth cooker in “Breaking Bad.”

The story that unfolds in Craig Nelson’s “The Age of Radiance” makes Walter White’s character seem laughably tame by comparison. The real-life Heisenberg held Adolf Hitler’s wartime fate in his hands. And the Heisenberg story provides just a fraction of the fascinating history behind humans’ quest to harness and exploit nuclear energy, which is the main thrust of Nelson’s book.

The Heisenberg story is dramatic enough to have been the fodder for a Tony-winning play, “Copenhagen.” (I saw it in 1999 at the Duchess Theatre in London; Henry Kissinger sat a few rows in front of me.) The play suggests that Heisenberg might have deliberately slowed Germany’s march to acquire the bomb in hopes of buying his Allied counterparts time to obtain it first.

At its core, this is a book about fission and fusion and rocks that glow in the dark. Nelson tracks the histories of key researchers in Germany, France, Italy and Austria as they uncover the secrets behind such elements as radium and uranium. Their discoveries defied the commonly accepted laws of physics, which held that energy couldn’t just arise out of nothing.

The scientists were nerdy, bookish types not known for their social graces and not terribly focused on the steady rise of fascism and anti-Semitic sentiment across Europe, particularly in the 1930s.

When their own Jewish roots came under scrutiny, the scientists recognized the dangers of open scientific discussion of nuclear energy as Heisenberg and other servants of madmen like Hitler and Benito Mussolini listened in. That’s only part of the rich drama behind Nelson’s account of the life-or-death competition to weaponize fission technology.

Nelson is meticulous in establishing the main cast of characters ― Heisenberg, Marie Curie, Enrico Fermi, Lise Meitner, Leo Szilard, Nils Bohr and, of course, Albert Einstein. To do justice to their exploits, he necessarily must delve into the minutiae of their discoveries. So get ready to exercise your science, physics and math skills.

He demands perseverance from readers as he explains the process leading to the first nuclear chain reaction. The payoff is well worth the price. This is the kind of book that doesn’t just inform you but leaves you feeling smarter.

Nelson works his way through those early days, culminating in the two bombs dropped on Hiroshima and Nagasaki that ended World War II. Next comes the Cold War competition for nuclear domination between the United States and Soviet Union, followed by civilian nuclear disasters at Three Mile Island, Chernobyl and Fukushima.

The nuclear research facility at Los Alamos, N.M., serves as the constant backdrop for Nelson’s narrative. Little did the U.S. government know, but standing alongside those top scientists in their super-secret research facilities at Los Alamos were spies who were relaying all the key details straight to Soviet leader Joseph Stalin, whom Nelson describes as one of the greatest mass murderers in history.

There’s almost an air of absurdity in Nelson’s historical account of how the world became ― and continues to be ― obsessed over the potential of “radiant energy” for weapons.

He uses the word radiance quite deliberately. This isn’t a book about radioactivity, which carries such negative connotations that it reduces people’s ability to discuss nuclear energy rationally. Radiance, the way Nelson uses it, is more about the concept of naturally occurring materials that give off boundless energy all by themselves.

The quest to turn that energy into weapons of mass destruction, or to irresponsibly build unsafe nuclear power generators, is the fault of humans. For Nelson, radiant energy is a gift, and he seems to constantly ask aloud: Is this the best we can do to take advantage of it? (MCT)