Why we all feel ‘Overwhelmed’ 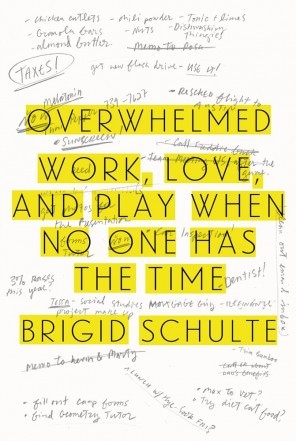 Overwhelmed: Work, Love, and Play When No One Has the Time
By Brigid Schulte
(Sarah Crichton Books/Farrar, Straus and Giroux)


Remember boredom? Fifty years ago, big thinkers were wringing their hands over an oncoming age of mass boredom prompted by ever-increasing worker productivity. The Harvard Business Review fretted in 1959 that “boredom, which used to bother only aristocrats, has become a common curse.”

Needless to say, the curse has lifted. These days, most of us experience boredom only in the rare moments when our smartphones are out of reach. The bane of our age is busyness.

Washington Post reporter Brigid Schulte’s new book, “Overwhelmed: Work, Love, and Play When No One Has the Time,” documents the incredible rise of what she calls “the overwhelm”: “that everything-all-at-once feeling that you’re burning the candle from both ends and out the middle.”

In pursuit of both a diagnosis and a cure, Schulte talks to psychologists, sociologists, neuroscientists, CEOs and even Pat Buchanan. She flies to Paris to report on a time-use conference, and to Denmark for a smart chapter on why Danes report such low levels of stress. (To be fair, she had to: “Scandinavians do it better” chapters are mandatory in 21st-century pop-sociology books.) And, as the subtitle promises, she uncovers significant problems in Americans’ work culture, our relationships and our approach to leisure.

Schulte structures the book around her quest to make her own life more sane. With two children and a demanding job, she portrays herself as perpetually frazzled, frustrated and running late. Sure, she could ditch the rat race and raise her kids in the country. But are such extreme measures really necessary to feel sane? “What if you wanted ― or needed ― to find time to do good work and splash in puddles with your child?” she asks, and she’s right: It shouldn’t be impossible.

The evidence Schulte marshals is startling and sobering, and she is skilled at finding the kind of juicy factoids that readers won’t be able to resist repeating: The average high-school student now experiences the same anxiety levels as a mid-20th-century psychiatric patient, for example. Christmas letters are increasingly being used to brag about the “craziness” of the family schedule. And contemporary American mothers spend more time caring for their children than women did in the 1960s.

Busyness, Schulte finds, has become the kind of luxury good that leisure formerly was. If “aristocrats” once led lives of extravagant relaxation, now they model themselves after globe-trotting humanitarians like Bono. She quotes one overwhelmed woman’s observation that fancy cars are no longer the primary status symbol; instead, “it’s how busy you are, how many activities you’re in, the bumper stickers on your car ― that shows status.” In an era of high unemployment and underemployment, busyness signals that the world wants so much more of you than you can possibly give it. When people lament their terrible difficulty in getting to “inbox zero,” this is what they’re bragging about.

Busyness culture is real, however, and Schulte writes about it with savvy. But throughout the book, I found myself scribbling “Why?” in the margins as she recounted the elements of her personal “overwhelm”: Why is she baking cupcakes until 2 a.m.? Why is she doing so much weeding? Why did she agree to make breakfast for friends and then run in a Turkey Trot race, mere hours before hosting 18 people for Thanksgiving dinner? It should not require an army of time-management experts to figure out that exactly zero of these activities are necessary.

In the end, Schulte is tackling two very different problems in one book: the intractable “overwhelm” faced by low-income parents who literally do not have enough time in their days, and the “overwhelm” faced by middle-class mothers who have decided to stay up until 2 a.m. making cupcakes. Both problems are real, but one is primarily political and economic, and the other is psychological and cultural.

That’s not to dismiss the deep issues at play in Schulte’s quest for peace and control. As she points out, women’s time has always been subject to interruption, while men have historically been able to install wives and secretaries as gatekeepers. Notions of ideal motherhood are confusing and exhausting, and are arguably growing more rigid by the year. All of this goes a long way to explaining why women’s attempts to carve out “me time” are so often trivialized and dismissed. But the first step should be a relatively simple one: Say no to baking the cupcakes. (MCT)