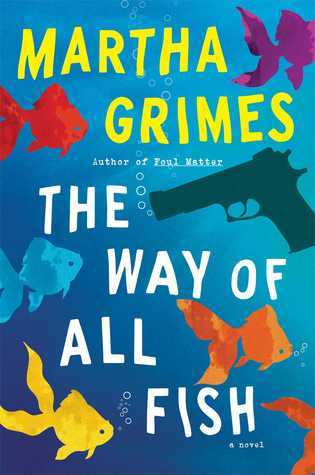 The Way of All Fish
By Martha Grimes
(Scribner)

Martha Grimes is best known for her novels about British police detective Richard Jury, his aristocratic friend Melrose Plant and other residents of the postcard town of Long Piddleton. Those 22 novels meld the traditional village mystery with the police procedural, giving the plots a hard edge balanced by satire and humor.

Jury and friends are absent in “The Way of All Fish,” Grimes’ 31st novel, but they won’t be missed in this witty satire on the publishing industry.

“The Way of All Fish” is a sequel, of sorts, to Grimes’ 2003 novel “Foul Matter,” in which the New York publishing industry is seen as a swamp filled with quicksand and inhabited by piranha. Publishing fares a little bit better in “The Way of All Fish,” but not by much.

L. Bass Hess is the kind of literary agent who slithers onto the scene, suing clients who are smart enough to fire him. Bass wants his commission, whether he sold the book or not. Cindy Sella, who suffers from writer’s block, refuses to settle with him. Her lawyers, however, aren’t doing much good for her. “Lawyers to the right of her, lawyers to the left, lawyers in front, lawyers behind,” observes one character. “Is there a vision of hell, even in Dante, that could possibly compete with that?”

But Cindy has several people willing to help her, including two scrupulous and highly literate hit men named Candy and Karl, a best-selling writer, the owner of a junkyard and a Vegas magician, among others. The plan isn’t to kill Bass, as that would put suspicion on Cindy, but to drive him mad.

Grimes peppers “The Way of All Fish” with bits of pop culture and allusions to classic crime writers, including Raymond Chandler, Dorothy L. Sayers and Edgar Allan Poe. The wry humor and sharp dialogue enhance the brisk plot that easily moves from New York to the Florida Everglades to a monastery, with a denouement that will make readers want to cheer.

“The Way of All Fish” showcases Grimes’ insightful storytelling, even without Jury and company. (MCT)