BAODING, China, Nov. 18, 2021 /PRNewswire/ -- Recently, GWM has launched the campaign "HAVAL 7Million Celebration-Drive Beyond" on social media including Facebook and Twitter. It announced the news of celebrating HAVAL's global sales of over 7 million with car owners all over the world.

In this campaign, photos of global HAVAL car owners with their cars are solicited as the prototype of making artistic illustrations. So far, the campaign has evoked discussion and attention on HAVAL among users in Russia, Australia, Saudi Arabia and other countries. 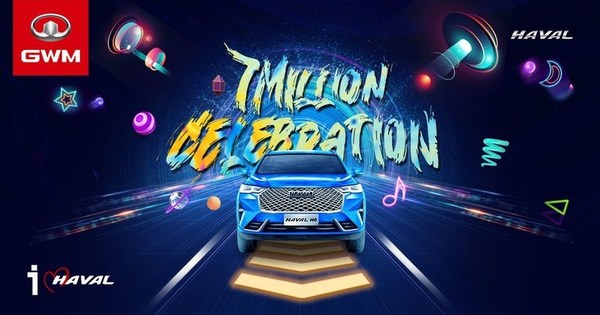 In fact, in addition to this campaign, HAVAL has organised multiple activities for users around the world, to whom the brand has become an important part of their life. For example, it has partnered with IRONMAN, a popular triathlon competition in Australia, to share a healthy lifestyle with its users. It has also sponsored the Russian DOTA 2 team VP, winning customers who love e-sports.

HAVAL has being the best-selling SUV brand in China for years. Since HAVAL first sold 500 vehicles to Italy in 2006, it had reached annual sales of over 30,000 in 2011. This indicates HAVAL had laid the foundation of its global sales a decade ago.

GWM has made some optimisations to its models over the years. It launched HAVAL JOLION, 3rd Gen HAVAL H6, HAVAL H6 HEV and other new products globally this year.

"This car is for sure stylish and presents a positive life attitude with its distinguished blue colour," said the Russian HAVAL JOLION owner. "HAVAL H6 a machine like no other, very versatile, comfortable and powerful engine, I have it and it has proved to be effective," said Mario Arias from Australia.

HAVAL was rated "China Brand Leader" by Za Rulem, the most authoritative automobile media in Russia; it won the 16th National 2021 SUV Award of 4X4 Club. It was also praised as "the best Chinese car in Australia so far" by the Australian media Carsales in a test drive.

HAVAL has become a preferred choice of users in Australia, Russia and South Africa. Following the exploration of emerging markets such as Thailand, Saudi Arabia and Brunei, it has developed a sales network covering over 50 countries and regions all over the world.

All these well explain why HAVAL has managed to sell over 7 million vehicles.

According to the official announcement of GWM, new models such as HAVAL Dagou and HAVAL H6S will make their global debut next month, which is another exciting news.