As a result, some government officials are raising concerns that the strengthening won could weaken the competitiveness of local exporters.

But some currency analysts downplayed the concerns, saying that the fluctuation could be interpreted as the process of normalization after the market was roiled by the COVID-19 pandemic: In the first half of the year, global investments thronged to safe havens such as the dollar, the euro and the Japanese yen.

“I would suggest that monetary policymakers contemplate what the optimum exchange rates are, rather than be in hurry to conduct (verbal or practical) interventions in the currency market to hamper the further appreciation of the won,” said a futures trading analyst on condition of anonymity.

He downplayed the “habitual” worries, saying that it has been not the exchange rates but fundamentals of the Korean economy and enterprises that generally determine the flow of foreign capital and export performance.

An official of the Financial Supervisory Service suggested the data that the won-dollar rate roughly ranged between 1,050 won and 1,250 won on average over the past decade, when some particular prices are excluded.

Over the Jan. 1-Oct. 20, 2020 period, exports fell by 8.4 percent on-year, according the Korea Customs Service. But the pace in negative growth for the recent weeks (Oct. 1-Oct. 20) slowed, posting at minus 5.8 percent, despite the fast appreciation of the won.

The nation’s lackluster export performance, which started in late 2018, is mainly attributed to weak global demand in the aftermath of a marked slowdown in gross domestic product growth in China. This brought the situation that Korea posted the lowest GDP growth in a decade in 2019, when the economy expanded only 2 percent on-year. 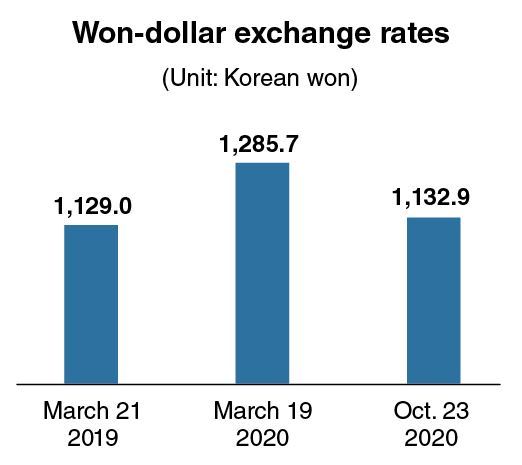 In addition, a group of economists already said that a series of policies involving a drastic hike in the minimum wage under the Moon Jae-in administration caused weakness in ordinary households’ consumption capacity amid high unemployment rates and mass business closures.

“The recent slide in greenback prices could be beneficial in terms of improving purchasing power of local households and businesses, as import prices of foreign-made consumer goods and raw materials, including crude oil, are expected to go down,” one analyst said.

“In addition, a cheap dollar is also not always harmful to exporters. When the dollar climbs to over 1,250 won, the export-oriented company should also bear the cost burden from price hikes in imported manufacturing parts.”

Meanwhile, it could be premature to say that the exchange rate has been normalized. Some market insiders cite the US presidential election, slated for Nov. 3, and the ongoing pandemic as the main cause of uncertainty.