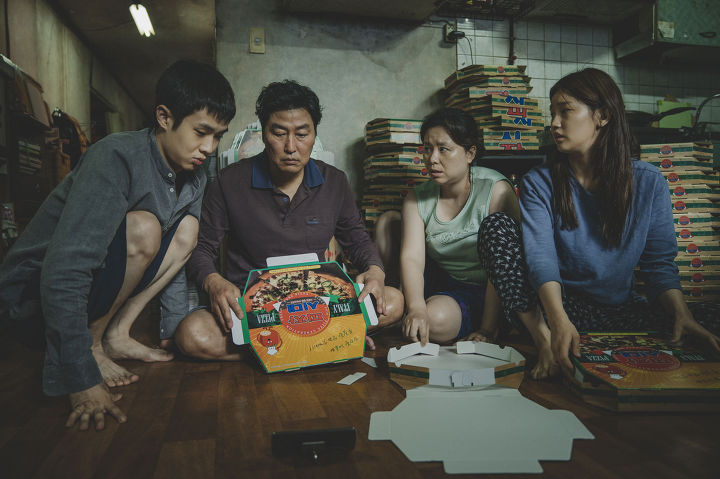 "Parasite" (CJ Entertainment)
Once considered the nation’s most prestigious awards in cinema -- equivalent to the Oscars -- the Daejong Film Awards went ahead Wednesday evening in a less than glamorous atmosphere, with empty seats and absent winners, including director Bong Joon-ho of the best picture-winning “Parasite.”

The 56th edition of the event, also known as the Grand Bell Awards, took place with no audience for the first time since its establishment in 1962 due to the ongoing novel coronavirus spread.

“Parasite” snatched up five wins, including the most coveted best picture and best director prizes. Nominated in 11 categories, the film’s big win was not unexpected, but director Bong was noticeably absent.

Kwak Sin-ae, head of the film’s production company Barunson E&A, read the acceptance speech on behalf of the director, adding that Bong was on a long leave following a series of international events.

A Barunson E&A official told The Korea Herald that Bong has not been involved in an official event since attending the Oscars in February, focusing on preparing future films.

Jung Yu-mi of “Kim Ji-young, Born 1982” and Jin Sun-kyu of “Extreme Job,” who won for best actress and best supporting actor, respectively, also did not attend the ceremony, as they were filming.

None of the other nominees for best actress -- Kim Hyang-gi, Kim Hee-ae, Jeon Do-yeon and Han Ji-min -- attended the event. For best actor, all the nominees apart from winner Lee Byung-hun of “Ashfall” were also absent.

Once the country’s top film awards, the Daejong Arts Awards has seen its prestige nose-dive in recent years. In 2015, the event was boycotted by several actors and directors for requiring attendance of nominees as a prerequisite for winning. Since then the award has lost some of its luster, with continuing criticism of poor organization and unfair selection of winners, topped by events that further dented its reputation.

In order to enhance fairness of evaluation, in 2018, the film awards abolished the long-held entry system and announced it would select nominees from all films released in the previous year, and the ceremony -- originally held between September and October -- was also shifted to the beginning of this year as a result. This year’s ceremony, which had been set for February, was postponed due to the outbreak of COVID-19 in January.

Many in the industry urged still more efforts by the awards’ organizers to bring back stars to the red carpet. “Above all, the disappointing result shows how disconnected the event’s organizers are from the cineastes in the field,” film critic Kim Sung-soo said.

“Right now, the film industry is going through its worst period due to the COVID-19. Most film fests slated for the first half of the year have been postponed, new releases have been canceled and everyone in the industry is going through a difficult time. Pushing ahead with the ceremony at such a time shows that the organizers did not share such concerns of the filmmakers and actors,” the critic added.

Filmmaker Lee Sang-woo pointed out that narrowing the gap between the older and younger generations is crucial.

“Daejong is an old event and it needs to bring in more young voices from active filmmakers. Although star directors like Bong Joon-ho and Yoon Je-kyun may be too busy to actually take part in its running, the awards need to get such people involved to communicate with young actors and producers. If this communication works, turning the awards back into a festival for everyone won’t be such big deal,” Lee said.

Some called for a more fundamental change.

“To regain its original reputation, it can’t stop with just selecting winners that are acceptable, but it needs to be able to persuade the actors, directors and producers of the awards’ unique identity,” critic Kim said.