Shim Eun-kyung speaks about why she continues to study

“I’m truly grateful for all the congratulatory messages. It still doesn’t feel real,” Shim, currently living in Japan, told The Korea Herald through an email.

“I’m very thankful to all the staff members who took part in making ‘The Journalist’ and everyone who watched the film and sent words of support. I’m just studying, and studying even more than usual, to show the best acting I can do.”

On March 6, the 26-year-old became the first Korean to win the best actress prize at the Japan Academy Film Prize for her role as a journalist who digs into a political scandal.

While rumors had swirled that several Japanese actresses had turned down the role due to the film’s critical view of Japanese politics and journalism, Shim explained that the film’s producer had her in mind from the very start.

“I heard producer Mitsunobu Kawamura had cast me out of his trust in my acting. I am still very grateful for his words that he has no doubts that I would be able to portray the complex character of Yoshioka Erika better than anyone else,” Shim said.

Shim, who debuted in 2003 with the megahit Korean TV drama “Dae Jang Geum” (Jewel in the Palace), has steadily built up her acting career, starring in television series and films.

Shim’s breakthrough came with the 2011 comedy film “Sunny.” In 2014, Shim won the best actress prizes given by the Baeksang Awards and Chunsa Awards for the comedy-drama “Miss Granny,” in which she co-stars with veteran actress Na Moon-hee.

Shim, who says the core value of acting is realized only through persistent studying, continued to challenge herself as an actress.

Following her success with “Sunny” in 2011, Shim went to the US to study at the Professional Children’s School in New York City “for new experiences and to cultivate knowledge.”

She headed to Japan in 2017 for similar reasons. While her pronunciation and acting as a Japanese native in “The Journalist” awed many of her fans and Japanese viewers, Shim said she started studying the language just a year before shooting the film.

“Regarding my job as an actor, speaking the language, especially practicing the exact tone and nuance of the language is very important. Luckily, I was able to speak with many native Japanese and repeat training in such aspects,” Shim said. 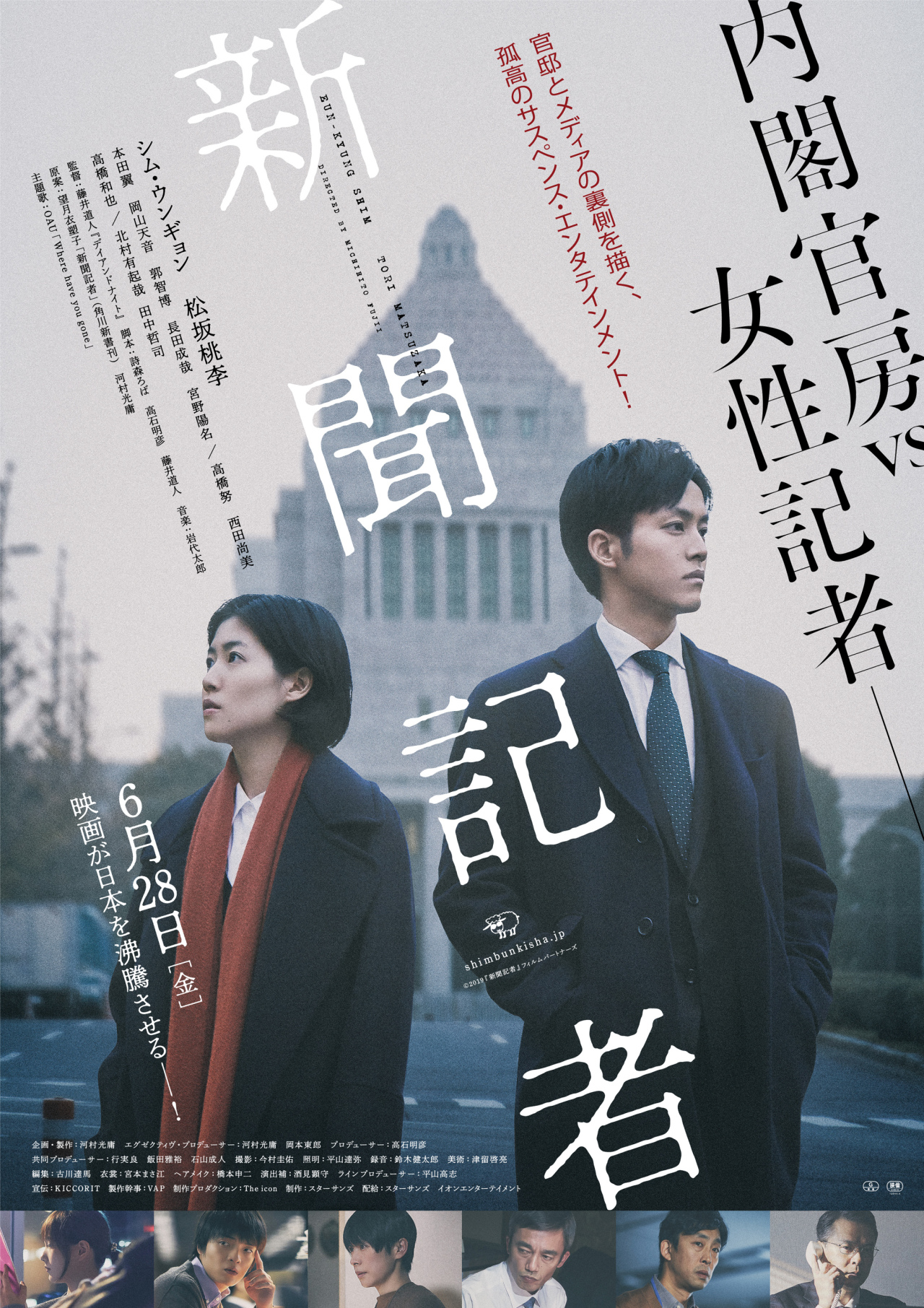 "The Journalist" poster (Management AND)
While making a film in Japan was not much different from doing so in her home country, Shim said she experienced “the essential joy of acting” while making “The Journalist.”

“Yoshioka Erika tended to make me fall silent and feel more serious throughout the filming. My co-star Tori Matsuzaka and I intentionally avoided speaking with each other much as we played opposing roles in the film. But as soon as we went into shooting, the tension and immersion overwhelmed me.”

In the film, Tori plays Takumi Sugihara, an elite bureaucrat who gets involved in manipulating public opinion and gradually grows skeptical and conflicted about his position. Tori also nabbed the best actor award at the 43rd Japan Academy Film Prize.

Shim will continue to work in Japan for now.

“I have always been intrigued by Japanese films and have always wanted to act in Japan. I didn’t expect to accomplish my goals quite so fast, so big like this.”

“The Garden of Camellia,” starring Shim, is slated for release in July. The first film by photographer-turned-film director Ueda Yoshihiko, it depicts the lives of an elderly woman, played by veteran Japanese actress Fuji Sumiko, and her granddaughter, played by Shim, who live together in a rural area.

Meanwhile, following Shim's awarding at the Japanese academy, the film "The Journalist" reopened in the local theaters last week.