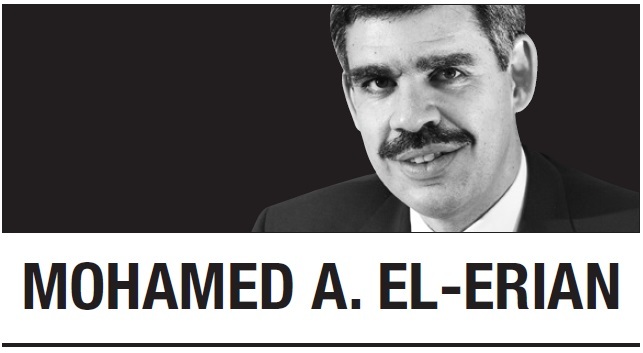 There are times, including in armed conflict, when adversaries see it in their own interests to opt for a truce and sell it to the outside world as a steppingstone to a comprehensive peace. But both sides know it will be only a prelude to renewed tensions down the road.

This could well be the best way to think of the “phase one deal” between China and the United States. Yet, it’s not how the equity markets see the situation. Instead, they are pricing the deal as simultaneously improving both the immediate and longer-term economic outlook.

After a protracted negotiation process, the American and Chinese governments finally reached agreement on a rather narrow set of issues. Pending additional information, stock markets have interpreted this as constituting a meaningful and immediate de-escalation of trade tensions, driving several indexes to record levels.

The most cited benefit is removing the short-term risk of tariff increases, a development welcomed by much of the US manufacturing sector. This has led some observers and market strategists to anticipate a halt to the contraction in global manufacturing, leading to higher business investment, the notably lagging components of global GDP growth.

As desirable as this is, such a favorable medium-term outcome is unlikely to materialize for several reasons.

First, the deal doesn’t address in a decisive way long-standing grievances that the US (and other countries) have about certain Chinese trade practices. It’s essentially a transactional deal that exchanges higher Chinese imports of US goods for removing the threat of a Dec. 15 increase in the level and scope of US tariffs on Chinese goods.

Second, the deal is too narrow to reverse deep and growing bipartisan support in the US for a tough stance against China, not just for economic purposes but also on grounds of national security and human rights.

Third, enforcing and verifying this deal are far from straightforward, exposing an important internal vulnerability.

We need only to look at some of the short-term political priorities in China and the US to understand why they opted for a short-term agreement that lacks sufficient substance and robustness to pivot to a durable resolution.

Amid a noisy impeachment process and the risk of a slowing economy in the run-up to next year’s election, the Trump administration has been seeking an explicit win, as short in duration as is probably intended. China’s interest lies in gaining time to accelerate internal restructuring needed to reduce sensitivity to trade disruptions. This is especially important when short-term stimulus measures are increasingly inconsistent with longer-term structural reforms. The last thing China wants is to face the trifecta of a trade/investment/currency war at a time of huge trade vulnerability, and as the situation in Hong Kong has opened yet another area of conflict with Western economies.

Judging from the price moves, the fixed income and currency markets seem to understand this better than the stock market. Specifically, the first two have been much more guarded in translating short-term relief into a longer-term lifting of the uncertainties facing global growth.

Not so for stocks, where the beneficial impact on valuation (higher) and volatility (lower) has turbocharged that of the extremely accommodating financial conditions imposed by ultra-stimulative Federal Reserve and European Central Bank measures. Certain metrics suggest that the global central banking policy stance is the loosest since the outset of the global financial crisis. All this is enabling stocks to ignore yet another deterioration in the leading indicators for European manufacturing, as well as emerging partial signs of possible wobbliness in US household consumption, by far the most important underpinning of global economic growth.

Investors should use the rise in prices to trade up in quality (particularly favoring companies with resilient balance sheets and high cash generation) and take the next step in gradually repositioning their portfolios toward the more bar-belled structure outlined in one of my prior columns.

Policymakers, rather than believe that global economic conditions will now turn from headwind to tailwind, would be well advised to press forward with domestic pro-growth reforms during this period of relative peace.

While hoping for the best, it’s better to treat the phase one deal as only a short-term truce.