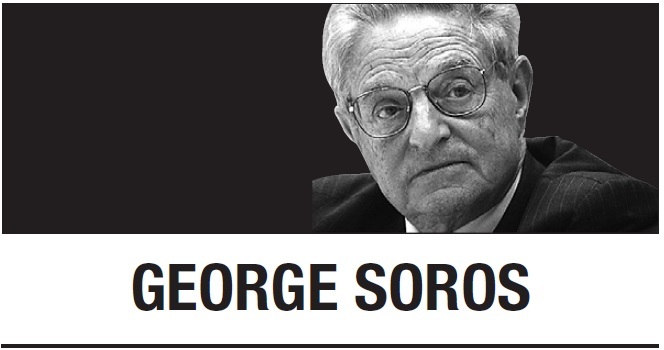 The fall of the Berlin Wall on the night of Nov. 8, 1989, dramatically and suddenly accelerated the collapse of communism in Europe. The end of travel restrictions between East and West Germany dealt a death blow to the closed society of the Soviet Union. By the same token, it marked a high point for the rise of open societies.

I had become involved in what I call my political philanthropy a decade earlier. I became an advocate of the concept of open society that had been imbued in me by Karl Popper, my mentor at the London School of Economics. Popper had taught me that perfect knowledge was not attainable, and that totalitarian ideologies, which claimed to be in possession of the ultimate truth, could prevail only by repressive means.

In the 1980s, I supported dissidents throughout the Soviet empire, and in 1984 I was able to set up a foundation in my native Hungary. It provided financial support to any activity that was not initiated by the one-party state. The idea was that by encouraging nonparty activities, people would become aware of the falsehood of the official dogma -- and it worked like a charm. With an annual budget of $3 million, the foundation became stronger than the Ministry of Culture.

I became hooked on political philanthropy, and, as the Soviet empire collapsed, I established foundations in one country after another. My annual budget jumped from $3 million to $300 million in just a few years. Those were heady days. Open societies were in the ascendant and international cooperation was the dominant creed.

Thirty years later, the situation is very different. International cooperation has hit serious roadblocks, and nationalism has become the dominant creed. So far, nationalism has turned out to be much more powerful and disruptive than internationalism.

This was not an inevitable outcome. After the collapse of the Soviet Union in 1991, the United States emerged as the sole surviving superpower, but it failed to live up to the responsibilities that its position conferred. The US was more interested in enjoying the fruits of its Cold War victory. It failed to extend a helping hand to former Soviet bloc countries, which were in dire straits. Thereby, it adhered to the prescriptions of the neoliberal Washington Consensus.

That is when China embarked on its amazing journey of economic growth, enabled by its accession -- with US support -- to the World Trade Organization and the international financial institutions. Eventually, China replaced the Soviet Union as a potential rival to the US.

The Washington Consensus assumed that financial markets are capable of correcting their own excesses, and if they did not, central banks would take care of failing institutions by merging them into bigger ones. That was a false belief, as the global financial crisis of 2007-08 demonstrated.

The crash of 2008 ended the unquestioned global dominance of the US and greatly boosted the rise of nationalism. It also turned the tide against open societies. The protection they received from the US was always indirect and sometimes insufficient, but its absence left them vulnerable to the threat of nationalism. It took me some time to realize this, but the evidence was incontrovertible. Open societies were forced onto the defensive worldwide.

I should like to think that the nadir was reached in 2016, with the United Kingdom’s Brexit referendum and the election of US President Donald Trump, but the jury is out. The outlook for open societies is aggravated by the exceptionally rapid development of artificial intelligence. It can produce instruments of social control that can help repressive regimes but pose a mortal danger for open societies.

For example, Chinese President Xi Jinping has embarked on creating a so-called social credit system. If he succeeded in completing it, the state would gain total control over its citizens. Disturbingly, the Chinese public finds the social credit system attractive, because it provides them with services they previously lacked, promises to persecute criminals, and offers citizens a guide on how to stay out of trouble. Even more disturbingly, China could sell the social credit system worldwide to would-be dictators, who would then become politically dependent on China.

Fortunately, Xi’s China has an Achilles heel: it depends on the US to supply it with microprocessors that 5G companies, like Huawei and ZTE, need. Unfortunately, however, Trump has shown that he puts his personal interests ahead of the national interests, and 5G is no exception. Both he and Xi are in political trouble at home, and in the trade negotiations with Xi, he has put Huawei on the table: he has converted microchips into bargaining chips.

The outcome is unpredictable, because it depends on a number of decisions that have not yet been taken. We live in revolutionary times, when the range of possibilities is much wider than usual and the outcome is even more uncertain than in normal times. All we can depend on is our convictions.

I am committed to the goals pursued by open societies, win or lose. That is the difference between working for a foundation and trying to make money in the stock market.


George Soros
George Soros, a pioneer of the hedge fund industry, is chairman of Soros Fund Management and the Open Society Foundations. -- Ed.