By Yonhap
Published : Nov 6, 2019 - 20:32       Updated : Nov 7, 2019 - 08:50
Reopening a now-shuttered inter-Korean industrial complex in North Korea can lead to improvement in the country‘s human rights conditions as the factory park would provide good working conditions that meet global standards, a US expert said Wednesday.

Edward Reed, an adjunct professor at the Asian Institute of Management who formerly served as North Korea country director for the World Vision aid organization, made the remark during a symposium on North Korea’s human rights in Seoul.

"An important step toward improving working conditions in North Korea would be to reopen the KIC and to invite international industrial participation,” Reed said, referring to the Kaesong Industrial Complex in the North Korean border town of Kaesong. 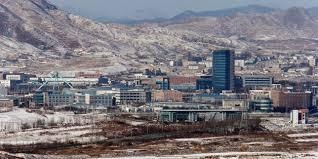 While the Kaesong complex was in operation between 2005 and 2016, it employed over 50,000 North Korean workers, and “even children of elite families bribed their way” into getting into labor there because working conditions were so good compared to normal working conditions in the North, he said.

“Perhaps the best conditions for industrial workers in recent years was to be found in the Kaesong Industrial Complex, where workers operated under global standards and payment was more or less transparent and adequate,” he said.

“According to reports by defectors, North Koreans considered the working conditions in Kaesong to be the best,” he added.

South Korea closed the Kaesong Industrial Complex in 2016 in retaliation against the North‘s nuclear and missile provocations.

The Kaesong complex had been considered one of the most tangible symbols of inter-Korean reconciliation, along with a now-suspended tour program to the North’s Mount Kumgang.

South Korean President Moon Jae-in and North Korean leader Kim Jong-un agreed at their third summit in Pyongyang in September last year to work together to resume the two projects, but no progress has since been made on the agreement due to international sanctions on Pyongyang. (Yonhap)