By Kim Young-won
Published : May 21, 2019 - 17:24       Updated : May 21, 2019 - 18:08
DAEJEON -- Slush, which first started as a small nonprofit event for startups in Finland in 2008, has grown into one of the leading events where investors, government officials and entrepreneur wannabes rub shoulders and discuss how to bring disruptive ideas to life.

Andreas Saari, Slush head and CEO of Wave Ventures, the first student-run venture capital fund in the Nordic region, said market conditions in Finland have become more favorable for startups since the establishment of the startup conference, but there still remains one major paint point that is unresolved -- finding the right team.

“Nowadays we are facing some of the same challenges that many other startup hubs face,” Slush co-founder told The Investor in an interview on Tuesday, adding, “Finding the right people is a real bottleneck.”

He attributed the growing number of companies that are successfully scaling up to become bigger players in Europe to the talent shortage.

He visited Daejeon City on Tuesday to participate in EXIT Daejeon 2019, a startup conference being held through Thursday.

The Slush founder was excited meeting Korean entrepreneurs during the three-day event.

“I’m curious to meet people who are building companies here,” Saari said.
During the interview, he shared some of his insights on startups and, what he learned through holding startup events and running venture capital firms. 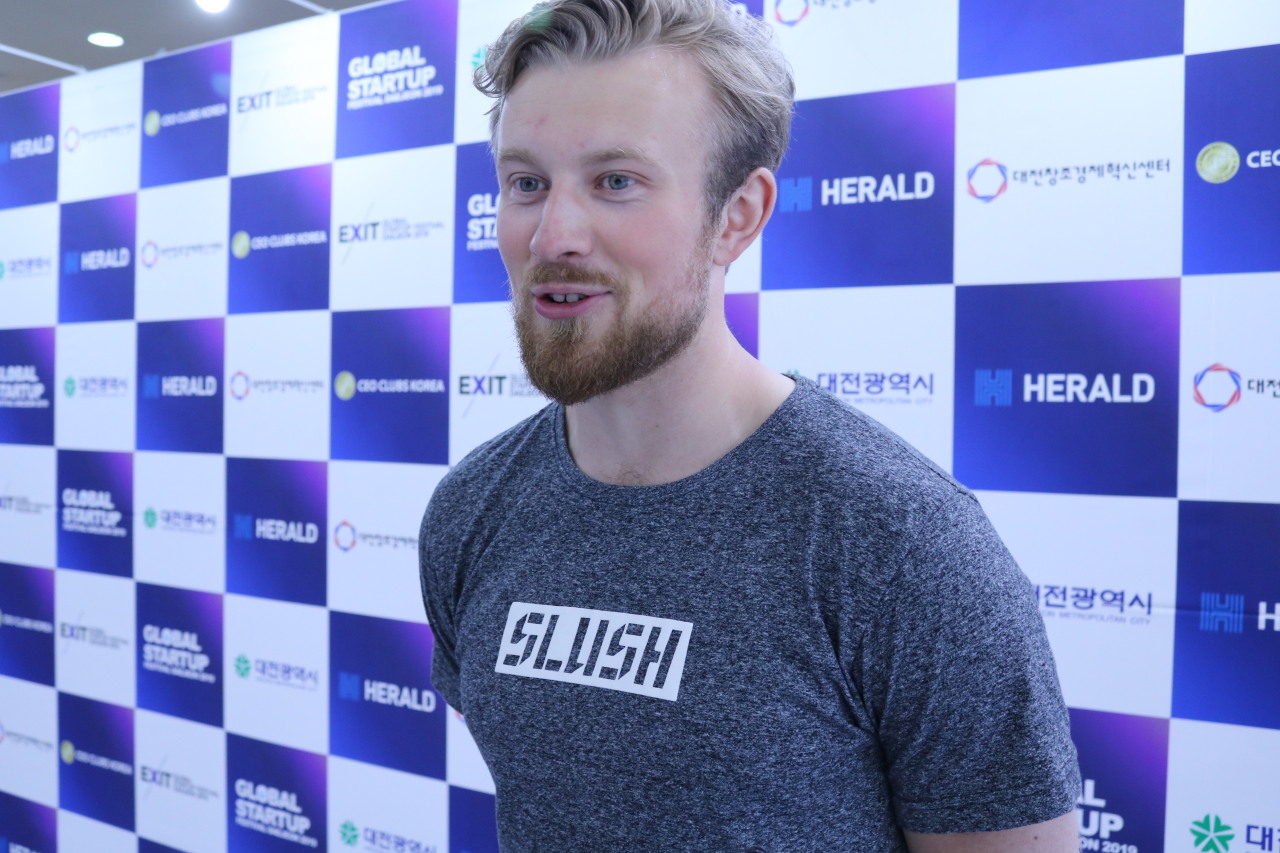 Below are excerpts from the interview.

The Investor: What is your main role in Slush?
Andreas Saari: I think my main job is to help our team be the best. And then I stay in touch with some of the key stakeholders and work with our board of directors. So, primarily I help my team

TI: Why is Slush so popular in Europe?
Saari: We focused heavily on entrepreneurs, and the real problems that startup builders face. Also, another thing is that we have really good people working for the event. Many of them are volunteers, who really like what they are doing. These (factors) make it easy to do a good job.

TI: Which business stage does Slush focus on in assisting startups?
Saari: Most of the companies are at an early stage. Seed funding or maybe series A. Those are the biggest group of startups. Last year, we had 3,100 startups, out of which, about 70 percent were in the introduction stage bracket to seed stage.

TI: How many startups have moved on to series A or B funding?
Saari: That would be the rest 30 percent, but I don’t have the exact numbers. All rounds are sometimes defined differently. What is considered as seed round in the United States might be considered as series A round in Europe.

TI: What do you see in promising startups?
Sari: The first thing that they have to get right is the team. It is obvious, but that is what it is really about. The second thing is that you have to solve real problems that need solutions. It has to be a problem that is affecting people’s life. And someone has to be willing to pay for it. Everything else will follow if you get them right.

TI: What is your impression on the EXIT 2019 event?
Saari: I really like it so far. I saw the peaching contest and companies there were really impressive. They spoke excellent English and had super interesting technology to build their products. I’m curious to meet people who are building companies here.

TI: Are you also running your own firm as an entrepreneur?
Saari: (My business is) a student-run venture capital fund Wave Ventures. I am on the board and we are now running a new team.

TI: Do you also consider yourself as an entrepreneur? If so, evaluate your entrepreneurship on a scale of 10.
Saari: I would say 10. I think entrepreneurship is all about mindsets and creating things. Building (new things) is what I most enjoy. This is also what we expect from other startups.

TI: What is the ultimate goal of Slush?
Saari: Helping entrepreneurs and creating new entrepreneurs. Creating a better and healthier environment for startups to be build and for companies to operate. We do this slightly differently (depending on) different locations. Helsinki has certain ones and Tokyo has certain challenges.

TI: Can you elaborate on the challenges in Helsinki?
Saari: (In the past) some of the attitudes toward entrepreneurs were not favorable. So it was not a popular option to build a company at all, now that has changed. There were also not many funds based in Finland.
Nowadays we are facing some of the same challenges that many other startup hubs are facing. More and more companies are successfully scaling up and becoming bigger. Also finding good talent and the right people is becoming a real bottleneck.

TI: Do you have plans for expansion of Slush in Korea?
Saari: We have to find the right people to build a team and build a local vision. It is possible but nothing is concrete.