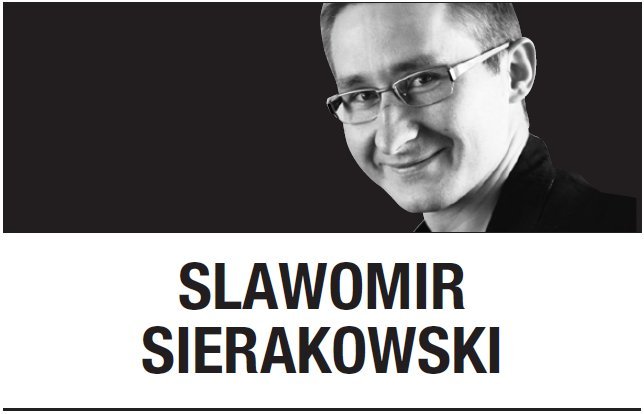 Donald Tusk’s term as president of the European Council will end Nov. 30, which is perfect timing for the Polish opposition. After the parliamentary election in late October, Poland will hold its presidential election in April 2020, and opposition voters already see Tusk as the only viable candidate.

For the past year, Tusk has been dropping hints that he intends to return to Polish politics. “No one expects that after the conclusion of my term I will just be watching politics on television,” he recently said. Tusk is openly critical of the policies of Poland’s ruling party, Law and Justice (PiS), and has heaped praise on the recently created European Coalition, an opposition grouping comprising his own party, Civic Platform (PO); the Polish People’s Party (PSL); the Democratic Left Alliance (SLD); and others.

With the European Parliament election this month, Tusk has an early opportunity to start building a campaign profile. In his current role, he has become one of the faces of the European Union, which enjoys 88 percent support in Poland. His return to Polish domestic politics thus would bolster the opposition and set him up to leave his mark on Polish history.

If Tusk decides not to run, many Poles will be sorely disappointed, and his standing in Poland will be diminished. But if he runs and loses to the incumbent, Andrzej Duda -- who is essentially a puppet of PiS leader Jaroslaw Kaczynski -- a long, successful political career will be severely damaged.

At an event last year commemorating the centennial of Poland’s renewed independence, Tusk depicted PiS as 21st century Bolsheviks, and pointed out that Polish interwar leader Jozef Pilsudski and Solidarity co-founder Lech Walesa each faced far more difficult circumstances when they defeated their own eras’ Bolsheviks. Raised in the tradition of Polish romanticism, Tusk may come to see saving the nation as the logical culmination of his political career.

Yet, despite Tusk’s advantages, he faces significant hurdles. Many Poles will never forgive him for raising the retirement age during his tenure as prime minister. In fact, that reform alone may be the reason why PO lost in 2015 to PiS, which lowered the retirement age immediately upon taking office. And current polls suggest that only 34 percent of Poles support Tusk’s return to domestic politics, whereas 44 percent oppose it, and that he would lose to Duda.

In the past, Tusk has always managed to boost his poll numbers by speaking to ordinary voters over the course of a campaign. But one cannot win a Polish presidential election on one’s own. For Tusk, mounting a successful campaign will require the backing of Grzegorz Schetyna of the European Coalition.

Like former British Prime Ministers Tony Blair and Gordon Brown with respect to Labour, Tusk and Schetyna were the PO’s key players when it was in power. Tusk was the party’s charismatic public face, and Schetyna was the mastermind who kept the machine running. The two men complemented each other perfectly, but Schetyna always aspired to Tusk’s position, and was ultimately marginalized. Still, while there is no love lost between them, they are both pragmatists.

The main criticism against Schetyna has always been his lack of charisma, which is thrown into sharper relief whenever Tusk’s star is rising. But Schetyna effectively silenced his critics when he forged the European Coalition, the only political project with any shot of defeating PiS.

In Poland, true power rests with the prime minister, but the presidency carries prestige and a legislative veto that can be overturned only by a three-fifths majority in the Sejm. So, given Schetyna and Tusk’s complementary interests -- namely, saving Polish democracy -- it stands to reason that Schetyna should hold the premiership and Tusk the presidency.

Though Tusk is more popular than Schetyna, it is Schetyna who holds all the cards. After Tusk decamped to Brussels, he neglected to maintain his domestic political relationships, which means that his former PO colleagues will not necessarily come running when he calls. They owe their loyalty to Schetyna, who controls the party’s organization and money -- and thus their own electoral prospects.

Obviously, this isn’t the arrangement Tusk would prefer. Complicating matters further, Schetyna is counting on Tusk to do his part in the European and Polish parliamentary elections this year, but Tusk may see little reason to stick his neck out before the presidential campaign really begins.

Recently, Tusk spoke at a University of Warsaw event commemorating Poland’s 1791 constitution, where he made a show of erudition by citing Immanuel Kant, Edmund Burke, George Washington, and Ortega y Gasset. He warned of a civilizational threat facing the world, and thereby pleased the elite in attendance. But in political terms, the speech was a mistake, as was a speech he gave the following week calling for national reconciliation. For the opposition, all that matters right now is defeating the populist threat to democracy; reconciliation is for later.

Tusk used to win elections in Poland because he was seen as a man of the people -- a regular guy with whom you could imagine yourself playing soccer. Had he resumed his old style of politics and appeared with a Polish family from a small-town housing project, Tusk would have made a splash. Instead, he chose to wax eloquent from a bastion of European elitism, uttering words that ordinary Poles will greet with indifference, if not hostility. The opposition may not be able to defeat PiS without him, but if Tusk wants to go home again, he will first have to remember where he came from.