[Feature] Opening up workplaces to people with disabilities

The right assistance and a shift in social perceptions are needed to pave the way for disabled people to excel at work, ultimately broadening the horizon of workplace diversity and harmony, experts said. 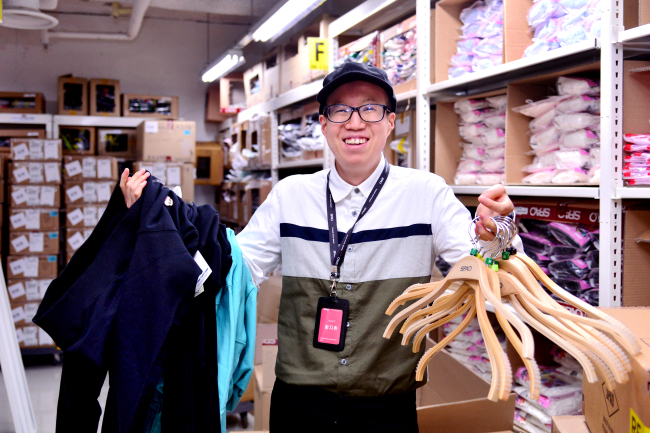 Hwang Jee-hwan, a 20-year old with a developmental disorder, works at Gangnam store of SPAO, a SPA brand run by Eland World. He is in charge of sales preparation -- product inspection, security tag attachment and product display prep -- as well as serving customers from time to time. Hwang works shorter hours than some other staff -- 9 a.m.–1:30 p.m. five days a week.

“I feel proud of myself when I find the product customers are looking for in the warehouse. ... Having a good attitude, respecting the manager, and precisely expressing my feelings are vital at the workplace,“ Hwang said in a coffee meeting with The Korea Herald.

Described by the store manager as having a “strong sense of responsibility,” Hwang is a person who goes by the books.

Prior to joining SPAO in September 2017, Hwang had enrolled at Seoul Vocational Training Center for the Developmentally Disabled for three months.

“Sometimes I feel like it is difficult to communicate with other workers, in particular when they talk fast. When I’m stuck in the situation I would ask them to repeat what they said, and they will repeat it for me,” Hwang said.

Excelling in a different line of work, lawyer Kim Dong-hyun of the Seoul Advocacy Agency for Persons with Disabilities received the Seoul government’s grand award in the welfare category last week in recognition of his efforts in the court room practicing law for disabled people. The award ceremony was held last week in celebration of the country’s 39th Day of Persons with Disabilities.

“I am very happy and humbled to receive the award. ... I’m not sure what I’ll try out next. I’m a fun-seeker who has been doing what I want at the time although I have not accomplished every goal. Let’s leave the future open,” lawyer Kim Dong-hyun told The Korea Herald in an interview last week.

Kim has a category 1 visually impairment due a medical accident that occurred while he was studying at Yonsei University Law School. Having completed his bachelors degree at KAIST, South Korea’s most prestigious engineering university, Kim had envisioned to become a lawyer specialized in IT.

“As a lawyer I am grateful for not having to make decisions that goes against my conscious. My job is to help persons with disabilities that have been victimized as opposed to squeezing defense for criminals,” Kim said.

Kim is currently waiting for a verdict slated next month on a case involving a disabled person in his 40-somethings who was unjustly denied the right to join a life insurance.

Before moving to the Seoul Advocacy Agency for Persons with Disabilities, Kim worked at the Seoul High Court as the first disabled judicial researcher.

As part of efforts to support employment of persons with developmentally disabilities, the government has opened seven vocational training centers for the developmentally disabled country wide with additional plans to build six more until the end of this year, according to Korea Employment Agency for the Disabled.

Hwang Jee-hwan was able to land a position at SPAO on his second try after coaching received at the Seoul vocational training center.

Opened in 2016, the center equipped with a replica of a SPAO store and 13 other real-life settings trains approximately 100 students a year.

It is crucial for students for developmental disabilities to repetitively practice the given task and experience the work first-hand in a real-life setting to feel comfortable on-site, the deputy director of the center said.

“It has become inevitable for companies to consider employment of disabled people due to government policy. Most persons with disabilities who are able to join the workforce are those with developmental disabilities. They are young, healthy, honest and genuine -- attractive human resources. But we ask companies to adjust entry standards, divide work hours and tasks,” Kim Jeong-yeon, deputy director of the Seoul Vocational Training Center for the Developmentally Disabled, told The Korea Herald.

“Such cooperation and consideration would ultimately improve the work environment as it would encourage a culture of sharing and repecting diversity.”

Under the Korean law it is mandatory for private companies with over 50 workers to make up 3.1 percent of its work force with people with disabilities, and the ratio stands at 3.4 percent at state-run institutions and companies. Those that do not meet the quota are levied a penalty, which varies by company.

The center works jointly with 14 companies, among which the center noted that SPAO was the most cooperative, with one developmentally disabled employee working at each of SPAO’s 54 stores nationwide.

SPAO also sends its store managers to train students for job seekers at the center to feel comfortable during the interview and after employment.

As for lawyer Kim Dong-hyun, the help he receives from a personal assistant provided by the Korea Employment Agency for the Disabled plays a key role in completing his job.

The assistant checks for typos, converts paper documents to computer files, makes sure the right documentary evidence has been attached among other tasks.

“The assistant I currently work with is meticulous, so she straightens out my mistakes. Inevitably there are parts I miss, and it is vital to overcome these shortcomings with proper help.”

Neither Hwang nor Lee reached the level of stability at work in one go. They had faced obstacles and frustration, which they overcame due to strong bonds with friends and family.

Laughing off the frustration faced after losing his sight, Kim Dong-hyun said he headed to a buddhist temple to complete 3,000 bows in desparation hoping for a miracle before returning to law school. A full bow starts with bowing the forehead to the floor, standing upright and then bowing again.

On top of his drive to become a lawyer, Kim Dong-hyun said two close friends with vision impairment -- judge Choi Young and doctor Kim Jeong-ho -- motivated him to get back on his feet.

“I was confident I could pursue a career as a lawyer as long as I don’t give up thanks to judge Choi Young who has set a good example,” Kim said.

“Judge Choi Young and Dr. Kim Jeong-ho helped me pull myself together. We’d meet up for workout sessions and hang out every Saturday. In a way they are my mentors, who showed me that many things are possible even with sight loss,” Kim added.

Aspiring to follow the footsteps of judge Choi, who became the country’s first judge with impaired vision in 2012, Kim’s next challenge is to become a judge.

Kim, who ranked the country’s fourth best showdown player in last year’s National Sports Festival, also shared plans to compete this year. Showdown is a sport for the visually impaired that is similar to air hockey.

In the meantime, Hwang may be seen behind the cashier in the future. Acknowledging that it won’t be an easy journey, Hwang said it is a next step he is eyeing.

“I want to learn how to use POS (cashier). It is hard for disabled people to learn how to function the device because some of the tasks such as typing in the promotion code and refunds are done manually,” Hwang said.

“It is nice to see workers serve customers (at the cashier). I think it is cool,” he added.