But five centuries later, thanks to YouTube, video calls and mobile apps, the Korean language is being taught in places far, far away from its native land.

On DuoLingo, a hugely popular free language-learning app with over 300 million users worldwide, some 3.3 million are taking the Korean course.

“It is the sixth-most popular course among our English users,” Michaela Kron, a spokesperson for the Pittsburgh-based startup, told The Korea Herald via email. The Korean course was added to the platform in September 2017 following a surge in user requests, the official said.

As for real classrooms, some 57,000 students are studying at 172 branches of the government-backed King Sejong Institute, from Nairobi to Minsk and from Adelaide to Haiti.

Further evidence of the language’s popularity can be found in the number of takers of the Test for Proficiency in Korean. A total of 264,842 took the TOPIK in 2018, up 77 percent from 2010.

So, what is behind the far-flung popularity of Korean, which is hardly spoken outside this small peninsula jutting out from Asia’s Far East?

For Maggie Yang, an Indonesian currently pursuing a master’s degree at Korea University, the beginning was K-pop.

At 16, she got hooked on TVXQ, one of the first K-pop boy bands to become popular overseas, and soon became an ardent fan of Korean TV dramas.

“Like most Korean-language learners, I became interested to learn it because I wanted to consume Korean cultural products without having to use subtitles,” said Yang, the winner of the 2017 King Sejong Institute Korean Speech Contest.

After finishing her master’s, Yang hopes to build a career in a Korean-related field and be a bridge between the two countries.

Many language learners are drawn by the Korean Wave at first, according to Kang Hyoun-hwa, president of the King Sejong Institute Foundation in Seoul, which oversees the management of the namesake language centers. The Korean Wave, or Hallyu, refers to the global popularity of Korean contemporary culture, which is at present best represented by smash hit boy band BTS. 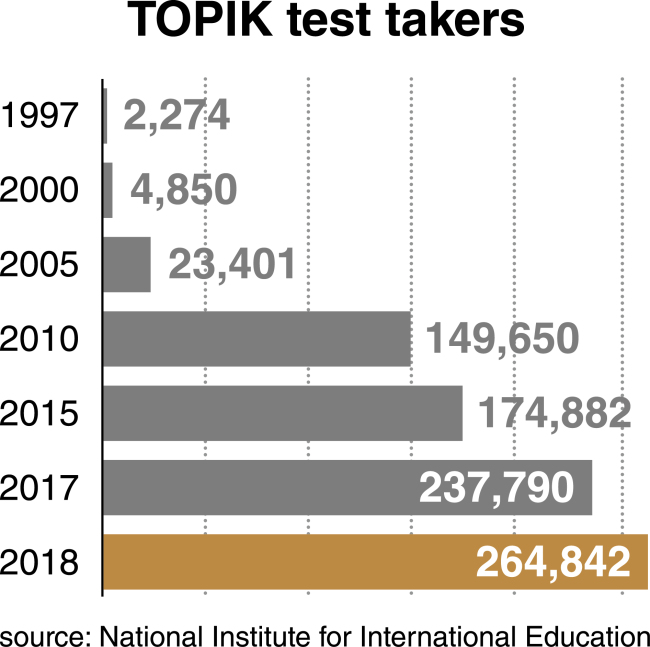 The chief cited data from the Modern Language Association of America that reported a 65 percent rise between 2009 and 2016 in the number of students taking Korean language classes at colleges and universities there.

The rise of Korean language comes in contrast to a decline in the numbers of Chinese and Japanese learners in US higher education, she pointed out.

“Clearly, K-pop culture is making people want to know more about the country and learn the language. But for that curiosity to really develop into a determined and earnest study, which is what’s happening in many countries now, people must have seen future value in it such as job prospects and business opportunities,” Kang said.

One might have started out as a K-pop fan wanting to better understand what their star is singing about, but after a certain phase, learners have more serious goals in mind when they continue investing their time and money.

“Not many of my pupils are in this as a hobby. They have reasons to learn,” said Anne Kwak, a veteran Korean teacher based in Seoul who provides both offline and online tutoring. Her current pupils include residents of Uppsala in Sweden and Wagga Wagga, Australia, she said.