The price increased 45 percent in only two years. Other apartment complexes in the district in southern Seoul and neighboring wards also saw their prices surge in the period.

Although there have been signs of prices declining after reportedly peaking last summer, many households still appear skeptical of the government-led policies to curb Seoul property prices.

Amid a sharp drop in apartment trading volume since the third quarter, both buyers and sellers are taking a wait-and-see approach. This comes after the Land Ministry said in September that it would partially unveil the third phase of new towns on the outskirts of Seoul in December.

The ministry plans to designate four to five areas in Gyeonggi Province, surrounding the capital, as new towns, with the aim of dispersing Seoul residents to a certain extent.

In western Gyeonggi, Janghang and Hwajeon-dong of Goyang City and Gochon-eup of Gimpo City have been brought up as potential candidates. Others included Siheung and Gwangmyeong cities and the Seoul Airport area of Seongnam City for the southern part, and Gambuk of Hanam City for the east of Seoul.

The government has said that it will reveal one or two areas at the year’s end out of the planned four or five designated new towns in the third phase. It is considering providing collectively about 200,000 households with new apartments through the Gyeonggi property development project.

The potential candidates mentioned are somewhat in line with the preferences of Seoul residents, who have recently moved to satellite cities. 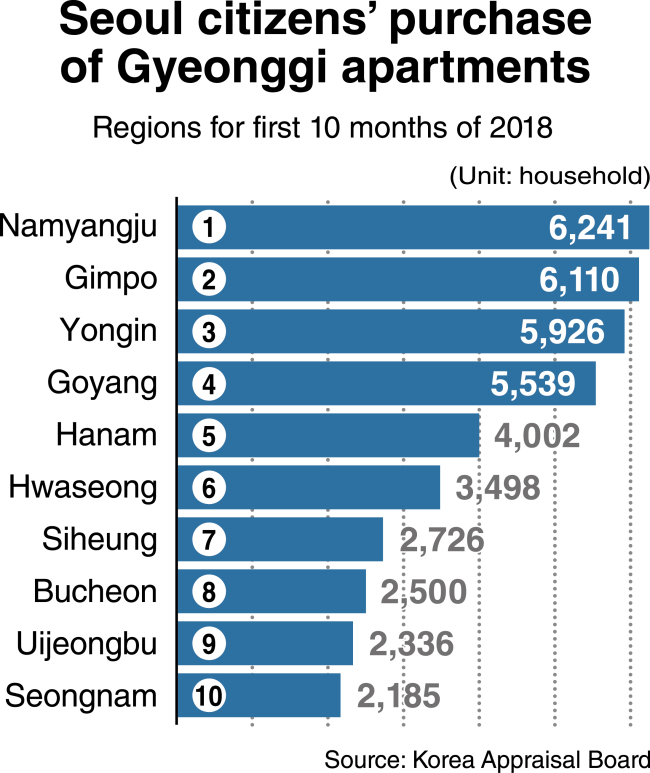 A real estate agent in Gimpo pointed out that the five districts took up 35.4 percent (20,562) of total purchases of 57,951 units across Gyeonggi Province. He said the five locations are close to Seoul and first-phase new towns.

The Land Ministry has made it clear that the third phase of designated new towns will be between the first round of new towns -- Ilsan, Jungdong, Sanbon, Pyeongchon and Bundang. The five apartment-dense locations were created over several years starting in 1989.

The second phase was pushed by the Roh Moo-hyun administration in the mid 2000s, which fostered the new towns of Unjeong, Hangang, Geomdan, Gwanggyo, Dongtan, Godeok, Pangyo, Wirye and Okjeong-Hoecheon.
One issue raised was commuters’ access to the central or southern parts of Seoul from these new towns.

Some towns, like Bundang and Pangyo, effectively dispersed high demand for real estate in the lucrative Gangnam district in Seoul, thanks to their relatively short distance from southern Seoul and transport convenience.

However, other towns like Dongtan, Hangang, Geomdan and Unjeong had unsold apartments due to weak transportation infrastructure linking the locations and Seoul.

The disparity in property prices between the new towns has grown into a source of debate and criticism on state policies. Another serious issue is that houses in Seoul have drawn steady -- or more – attention, even after the first and second phases of designated new towns.

“Alongside the upcoming designates, there are significant issues like extending Seoul Metro Line Nos. 5 and 9 to Gimpo and constructing the GTX (Great Train Express) linking locations like between Uijeongbu City and Yangjae-dong in Seoul,” said a civil servant at the Government Sejong Complex.

A realtor expressed skepticism, saying, “It is a repetition of the same policy for decades. As long as major conglomerates and financial firms are headquartered in Seoul, the spike in real estate prices will continue.”

He added that “those who have moved from Seoul to Gyeonggi have already worked out that it is very difficult to relocate back to Seoul due to the high price gap and resident-preferred new apartment subscription system.”