[Park Sang-seek] How to become a global citizen? 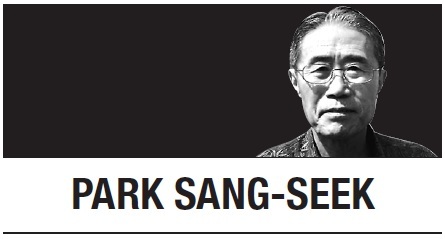 These days the term “Global Citizen” has become a popular catch-phrase in Korea, particularly among the so-called “internationalized people.” Why has this term become so popular or even “sexy”?

The trend reminds me of a speech I delivered at the International Management Institute of the Federation of Korean Industries on April 6, 2000. The title was “How to Become a Global Person.”

Prominent scholars and experts agree that the nation-state system is the main source of war because every nation-state seeks the consolidation of its unity or expansion of its territory. Therefore, the principle of national sovereignty has become the most important principle of international law.

Ironically, globalization has accelerated and consolidated ethnic, religious and sectarian conflicts within and between states, mainly because humans value their respective primordial groups much more than a national, regional or global state. The movement for West European unity can be cited as an exception but its success is still in doubt mainly because of ethnic diversity.

I believe that the followings are necessary for global integration:

Some advocate global culture, but most of them prefer Western civilization as the model for global culture, while others uphold their respective civilizations as global culture. To overcome these obstacles, all nations, taking advantage of the rapid globalization trend in all fields of life, should take an initial step by adopting the Universal Declaration of Human Rights as integral part of their domestic legal system, while the UN, which has been hosting a dialogue among civilizations since the beginning of the 21st century, should adopt a Charter of Global Civilization as soon as possible.

Ironically, since the very beginning of the global dialogue of civilizations, the clashes among different cultural groups including religious sectarian groups within and between states have become the main source of conflict in the world. The member states of international organizations are much more interested in the protection and promotion of their respective cultures rather than the peaceful coexistence of different cultures. Cultural exchanges and cooperation often serve as the political tools for strengthening and serving their economic and political power.

Within each state the same kind of cultural conflict is taking place. A group of people who live in a particular region tends to belong to an identical ethnic group. This ethnic group in turn develops a particular culture, forms a cultural group and ultimately tries to form an independent political group which is a state. No matter how much humans develop scientifically and economically, they can hardly get out of the dynamics of this ethnic shell game.

Thus, there are very few people who have become global persons. Even these few globalized people have no political power to transform the multiethnic (or multicultural) groups into one homogeneous group. The only realistic solution is to create incentives for all ethnic groups to prefer a peaceful and prosperous world to a prosperous but always terrifying world.

No international organizations have been able to weaken this primordial instinct. From my personal experience as Korean ambassador to UNESCO in the early 1990s, I have found out that almost no state has succeeded in abandoning or transforming the ethnic-centered state into a human-centered state.

These days, almost all states are suffering from the tragedy of the ethnic-centered state system. As a result of ethnic conflicts in the non-West, the oppressed ethnic groups in the non-West are fleeing to the West. Consequently, the people of the West have become more anti-Non-West. Under such circumstances, how can coexistence, harmonization or integration be possible? Actually, all leaders of the world have cheated themselves by advocating the peaceful coexistence of different cultures. There is no country for global persons.


Park Sang-seek
Park Sang-seek is a former Chancellor, the Diplomatic Academy of the Foreign Ministry, formerly called IFANS, and the author of Land of Tears (English novel). -- Ed.