By Yonhap
Published : Oct 1, 2018 - 19:24       Updated : Oct 1, 2018 - 19:25
South Korea on Monday celebrated its 70th Armed Forces Day with pomp and festivity, in a stark contrast to last year's showcase of its ballistic missiles and other military hardware intended to counter evolving North Korean threats.

The celebration came against the backdrop of the two Koreas' ongoing efforts to halt "all hostile acts" against each other, practically eliminate the danger of war and pave the way for a lasting peace regime on the divided peninsula.

At the War Memorial of Korea in central Seoul, the event sought to drive home to Koreans on both sides of the tense border the message that the South Korean military is here to buttress peace, not to fuel a sense of hostility. 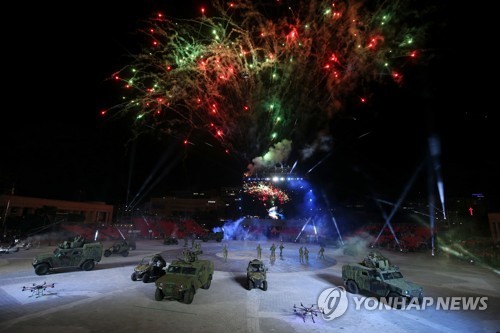 That message was evident in the program of the annual ceremony, which included a ceremonial flyby, Taekwondo demonstrations and musical performances, including one by the globally renowned singer-rapper Psy.

Before the ceremony kicked off, some 90 honor guards from the South Korean armed services staged a performance highlighting unity in the military, followed by some 50 members of military bands playing a mix of traditional and contemporary music.

Then came the entrance of Korean War veterans, including those from abroad who fought under the U.N. banner to defend South Korea during the 1950-53 Cold War conflict that ended only in a truce rather than a peace treaty.

As the ceremony got under way, Moon, credited with brokering long-awaited denuclearization talks between Washington and Pyongyang, stepped into the ceremony venue with a 21-gun salute and a nighttime flyby involving the country's fleet of T-50B supersonic trainer jets.

Seoul's decision to refrain from directly displaying strategic military assets at the ceremony highlighted its desire to spur its initiative for inter-Korean rapprochement, which was hardly thinkable last year when Pyongyang set off a series of provocations, including nuclear and long-range missile tests.

"Our military will focus more on our inherent mission to prop up the government's efforts for the denuclearization of the peninsula and entrench an enduring peace," the defense minister said in a speech.

"We are now leaving behind the history of war and confrontation and opening a new era of peace and prosperity," he added.

Albeit indirectly, the military showed off its high-tech defense assets for "future" security operations.

In a video clip, the Air Force introduced a set of its future weapons systems, including the F-35A radar-evading fighter jets and Global Hawk spy drones that will be deployed here in the coming years. The Navy showed a range of surface and subsurface vessels in the clip.

The Army put on display the "warrior platform," high-tech battle gear, including advanced bulletproof helmets and sniper rifles, which it seeks to introduce to maintain combat capabilities amid the prospect of a troop reduction.

Despite the efforts to highlight the peace theme, some citizens voiced dismay over what they see as a "watered-down" military event.

"It is quite disheartening that we failed to use the chance to highlight the enhanced stature of our military though I am aware of the peace atmosphere," an office worker in Seoul said, identified only by his surname, Jeong. (Yonhap)