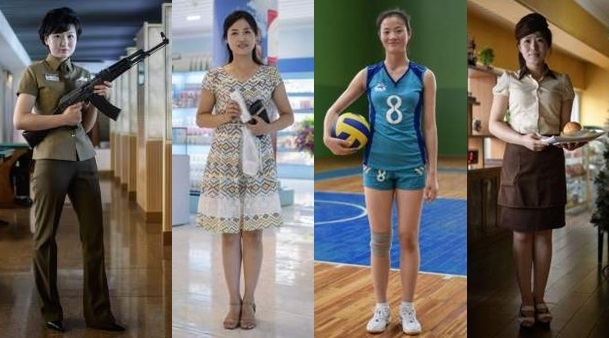 Photos showing North Korean women and the various roles they take up in the northern half of the peninsula were released online by Agence France-Presse Friday.

AFP has its own webpage called Faces of North Korea where it updates photos taken by photographer Ed Jones who captures life inside Pyongyang.

Instructor Kim Ju-yang, 20, holds a North Korean-made assault rifle at the Meari shooting range in Pyongyang on July 29. At the Meari shooting range, customers can try out a number of North Korean and foreign-made firearms, most of which have been modified to fire .22 calibre ammunition costing $1 per round.
Tour guide Ju Hye-yon is photographed on June 16 on a viewing deck of the Arch of Triumph, overlooking the Pyongyang city skyline. Against the drab of the city, Ju’s brilliant pink hanbok dress stands out in contrast.
Shop assistant Park Um-hyang, 24, is seen in a shop at the Mansudae Art Studio in Pyongyang on July 25. MAS was founded in 1959 by Kim Il-sung. The art studio employs some 700 artists who work in a clearly ranked hierarchy within a vast complex the size of a small village with hundreds of studios housed inside cavernous cement building.

Student and former Korean People’s Army soldier Ma Song-hui is photographed on May 14 at Teacher Training College in Pyongyang, where she studies.

Shopper Pay Ok-hyang, 24, is photographed in the shop of the Pyongyang Cosmetics Factory on July 28. She stands with a bag of her purchase.

Waitress Rim Ok-hyang, 20, poses at a hamburger restaurant in Pyongyang on July 18.

Tour guide Kim Song-hui, 26, poses for a portrait in this shot taken at the reptile enclosure of the Central Zo in Pyongyang on July 29. Kim dresses in hanbok, consisting of a navy skirt and a white top.