NK urges South Korea to halt joint exercise with US

According to the Ministry of National Defense, North Korean delegates demanded their South Korean counterpart halt the joint military exercise in the spirit of the Panmunjeom agreement, where the two Koreas leaders pledged to cease cross-border hostilities.

The South Korean delegates, in response, said the measure needs further discussion with the US. During his National Security Council meeting, President Moon Jae-in said he would give “serious consideration” to the suspension of the exercise.

“If North Korea implements denuclearization measures and sincere dialogue continues to ease their hostile relations, the country needs to flexibly change its military pressure against the North,” Moon was quoted as saying by Cheong Wa Dae.

While the two Koreas’ militaries pledged to honor their previous agreements on easing cross-border tensions, but appeared to remain apart over detailed measures for implementation.

According to the joint statement, the two sides agreed to “faithfully implement” their 2004 agreement designed to prevent an armed clash in the heavily-fortified demilitarized zone and waters close to North Korea.

Both sides also exchanged their views “sufficiently” over how to cease cross-border hostilities -- such as disarming Joint Security Area inside the truce village of Panmunjeom, coming up with military measures to ensure safety at the cross-border region and creating a “peace zone” in the West Sea.

But the much-anticipated meeting -- the first such held since 2007 -- appears to fall short of reaching initial expectations of returning the heavily-fortified demilitarized zone by pulling back guard posts and heavy artillery scattered across the cross-border region.

“We shouldn’t do such meetings again,” said Lt. Gen. An Ik-san, North Korea’s chief delegate. “It’s such a shame because we really wanted to have an exemplary meeting. I understand (South Korean) position. We have to make better preparation. 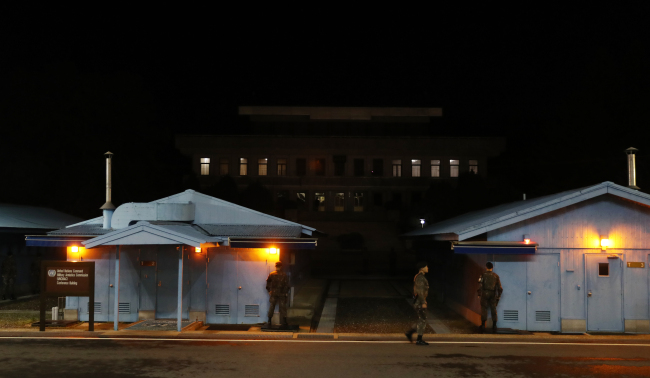 When asked about An’s remark, South Korea’s chief delegate Maj. Gen Kim Do-gyun said there were many issues to be dealt with because it was such a long time that two Koreas’ militaries met each other.

The closed-door meeting, held at a North Korean building inside Panmunjeom, lasted much longer than previously scheduled. Initially, the meeting was expected to end late afternoon, but it was after 9 p.m. that the two delegates announced the outcome of the meeting.

“It was not like we have significant differences...The issue we discussed today is not something that can be solved overnight,” said Gen. Kim. “As you are well aware, military issues need serious discussion.”

The five-member South Korean delegation was led by Maj. Gen. Kim, who deals with the inter-Korean relations at the Ministry of National Defense. Gen. Kim attended the meeting with officials from Cheong Wa Dae and the Unification Ministry.

Sitting down with Kim was North Korean Lt. Gen. An, whose rank is virtually equivalent to his South Korean counterpart. An also led his own five-member delegation that consisted of officers from the army and navy.

The meeting started off to a good start, with the two Koreas’ delegates exchanging pleasantries and pinning high hopes for the success of the rare inter-Korea military talks held for the first time in 11 years.

“Of all those in uniform from the two Koreas, I think Maj. Gen. Kim is the first military officer to cross the border...I’m very jealous,” An told Kim. “Kim should go down in history by setting a Guinness World Record for the history of the unification.”

“I believe there was a headwind against us and that was the reason why it took so much time for us to meet each other. I sincerely hope that our meeting will become a tailwind,” he added.

Describing his attendance at the meeting as a “great honor,” Maj. Gen. Kim replied that he hopes the military talks would become an opportunity to lay the groundwork for peace and stability on the Korean Peninsula.

The meeting is part of efforts to fulfill the Panmunjeom Declaration adopted after the inter-Korean summit in April, when South Korean President Moon Jae-in and North Korean leader Kim Jong-un proclaimed “there is no more war on the Korean Peninsula.”

The joint declaration calls for the two Koreas to completely cease all hostile acts against each other in every domain, including land, air and sea. In that vein, the two sides pledged to transform the Demilitarized Zone and waters close to North Korea into a “peace zone.”

“The consistent theme of the Panmunjeom Declaration is the spirit of self-reliance (between the two Koreas). In order to honor the spirit, we need to proceed with the meeting at an incredible speed and keep the principle of respecting each other,” said An.

The rare inter-Korean military talks came amid hope and caution over the prospects of inter-Korean relations. While the risk of an armed conflict has been dramatically reduced, concerns persist over whether there had been too much concession to North Korea through a series of summits.

Sparking the controversy was US President Donald Trump’s remark on suspending joint “war games” with South Korea after holding a historic summit with Kim Jong-un on Tuesday. CNN reported Wednesday that the US would announce its plan to halt the joint exercises as early as Thursday, local time.

South Korea and the US were planning to hold a large-scale computer-simulated joint drill in August. The Ulchi Freedom Guardian exercise includes computer simulations carried out in a large bunker south of Seoul, intended to check the allies’ readiness to repel aggression by North Korea.

“There is close coordination between South Korea and the US over the issue” of suspending the Ulchi Freedom Guardian exercise, said Choi Hyun-soo, a spokesperson of the Ministry of National Defense.

Asked if there was prior consultation between Defense Minister Song Young-moo and his US counterpart Jim Mattis, Choi declined to comment. Mattis was reportedly notified about a plan to suspend the exercise before Trump made the announcement in Singapore after his meeting with the North Korea leader.

South Korea’s Joint Chiefs of Staff, meanwhile, said there was still “no indication” of North Korea shutting down its missile engine test site, a pledge that Trump claimed Kim had made during their meeting.

“There are some locations that we closely watch with much interest,” said an official from the Joint Chiefs of Staff, who requested anonymity, citing office rules. “But we can’t reveal specific locations because they are (classified) intelligence on North Korea.”