Hundreds of thousands of South Korean students took the national college entrance examination, or suneung, on Thursday, a week after it was postponed following an earthquake last week.

Over 600,000 high school seniors began arriving at their designated test venues as early as 7 a.m. for the exam -- the equivalent of the US’ SAT -- which lasted nine hours starting from 8:40 a.m.

In many parts of the country, it was a cold winter morning, dipping up to minus 7.9 degrees Celsius in some areas. But well-wishers still gathered early in the morning near test venues to wish test takers good luck, handing out traditional sticky snacks like yeot and rice cakes, as “stick” in Korean is the same word as to “pass” a test.

“I hope they do as well as they can, so I wanted to wish my school’s seniors the best of luck. I have been out here since 6 a.m.,” said Ha Seung-joo, a second-year student from Baemoon High School, who was in front of Yongsan High School, one of the test venues in Seoul. Ha will take the exam next year.

Emergency officials on motorcycles were also seen near the school. They were among the nearly 15,000 officials dispatched on roads near schools to drive exam-takers rushing to get to their test venues at the last minute.

The highly competitive annual exam is the focus of 12 years of education leading to university. Students, as well as parents, often go to extreme lengths to prepare for the all-important event. 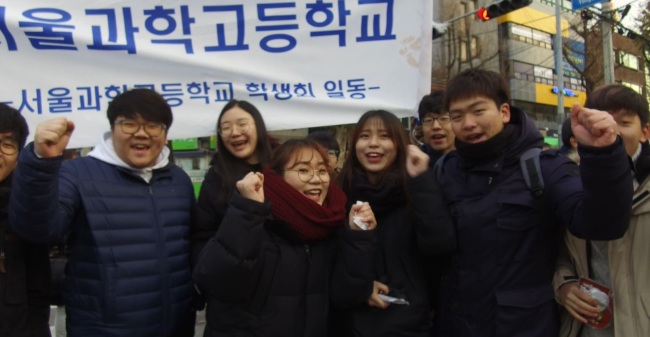 
Each year, authorities take nationwide measures to support test takers, as admission into top-tier universities is often considered a pathway to success in life. This year, extra measures were also put in place for test takers in the quake-hit region.

A 5.4 magnitude earthquake and a series of aftershocks that struck off the southeastern city of Pohang, North Gyeongsang Province, last Wednesday, had left cracks and damage in the walls of hundreds of schools in the coastal region.

The coastal region has a total of 6,098 students taking the exam at 14 test venues. One-third of them were placed in other schools adjacent to the initially designated places due to safety concerns.

At each venue, 13 emergency officials and 244 vehicles were dispatched as part of measures to prepare for possible aftershocks during suneung.

“I was worried at the time of the earthquake that postponed the exam, but eventually I made the most of the extra time for the best result,” a test taker at one of the venues in Pohang told local news outlet Kyunghyang Shinmun.

Due to the earthquake last week, over a thousand people have been displaced and are living in 13 temporary shelters in Pohang. Students had taken shelter at evacuation centers and continued to study despite fears of aftershocks. 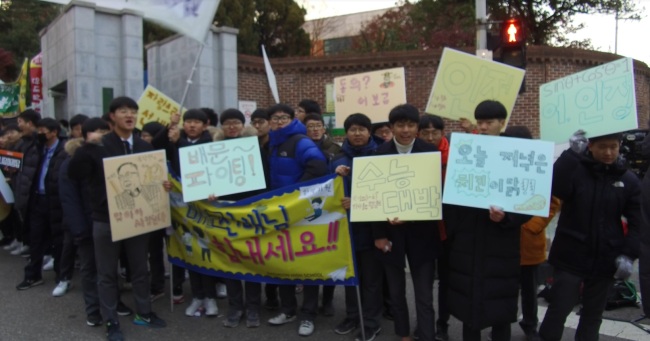