For Kim Chong-in, 78, morning starts at 5 a.m., with news updates about world politics.

“Humans are political animals. You should know what’s going on around the world,” the veteran politician told The Korea Herald at his office in Gwanghwamun, central Seoul.

That’s the approach Kim, originally an economics professor, took to stay relevant, and ideally ahead of the game, for more than three decades in South Korea’s turbulent politics. 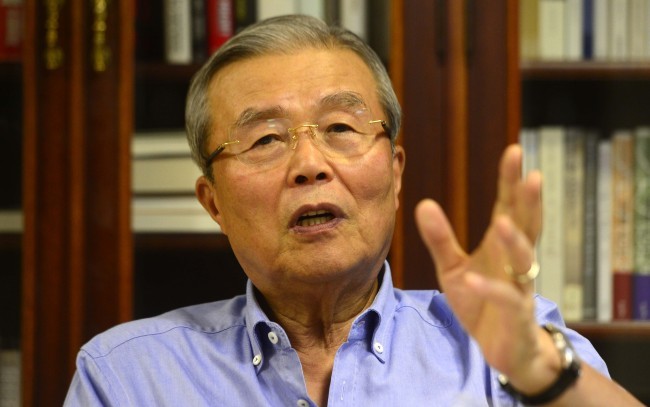 Of all countries, France is his main interest now, Kim said, because of the country’s young President Emmanuel Macron.

“Macron offered a novel, relevant vision to the voters who have for long wanted a change,” he said, adding that he had predicted the victory of the 39-year-old leader early on.

On his table was a German-translated copy of Macron’s book “Revolution” flipped midway open. Kim said he was reading it for the second time. (Kim majored in German at Hankuk University of Foreign Studies and earned his doctorate on economy in Munster University in Germany in 1972.)

May’s election victory by Macron, whose political party had only been formed the month before and who had never held elected office, was regarded as one of the biggest surprises of the year by many political watchers.

Kim seemed to see in the French president a vision that he wanted to realize in South Korean politics.

Like Macron, who has vowed to create a better climate for businesses, while seeking the middle way on social and political fronts, the Korean politician has long sought a middle ground.

In 1987, then 47-year-old head of the committee for Constitutional revision, Kim managed to include the concept in the basic law.

“The State may regulate and coordinate economic affairs in order to maintain the balanced growth and stability of the national economy, to ensure proper distribution of income, to prevent the domination of the market and the abuse of economic power and to democratize the economy through harmony among the economic agents,” states the Clause 2, Article 119 of the Constitution amended in the year. 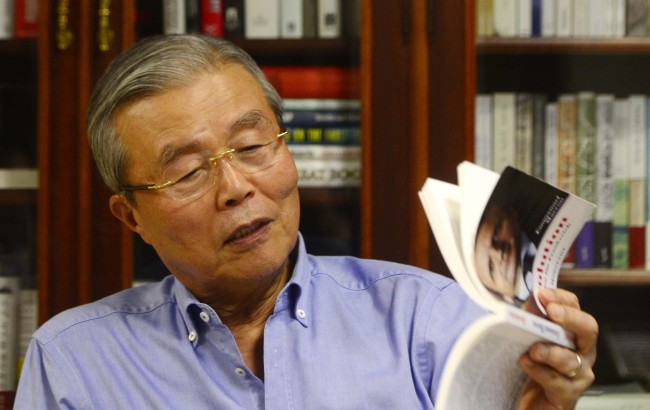 To be sure, some people see in him an opportunistic politician who switches sides as the tide turns.

In his more than 35 years in politics, he has been a proportional representative five times for conservative and liberal parties, a cabinet minister, presidential secretary and party chairman, again of the rival camps.

He helped now-impeached President Park Geun-hye elected, and then joined forces with Park’s opponents -- the Democratic Party of Korea, before quitting that party to run in this past presidential election as a candidate himself.

But Kim said he did this because he had a clear vision that he sought to realize, rather than out of pursuit of power.

He was and still is on a quest to chart a “Third Way” in South Korea’s polarized politics, but it was hard to find a person who can actualize his vision, he added.

“I only went to the parties upon their request,” he said.

Most recently, after renouncing his bid for May 9 presidential election, he had joined hands with Ahn Cheol-soo, the former chief of People’s Party who ran on a centrist platform. Asked to lead his committee for a joint government encompassing liberals and conservatives, during the electioneering period, Kim had decided to work for him.

In hindsight, Kim said, the People’s Party did not have right people to realize a centrist government.

He also had few kind words for Ahn, despite Ahn having called him his mentor.

“Ahn cannot be a politician,” he said of the candidate who eventually ended the election race in a distant third.

Kim, after three decades in politics, believes a good political leader is born, not made.

“One cannot be taught to become a political leader. Like pianists and violinists, politicians can learn up to a certain level, but they cannot move higher if they do not have an innate leadership,” he said.

He was cautious in speaking about President Moon Jae-in, saying it had only been two months since Moon took office as president.

He picked three people as excellent leaders -- Presidents Syngman Rhee and Park Chung-hee, and Lee Kuan Yew of Singapore for an overseas figure.

He said the two Koreans really showed leadership in running the country, but they had the wrong ideas, and eventually ended up as failed leaders.

Asked about his future plans, he said only that he would not return to established politics.

While refusing to comment further on domestic politics, Kim did not hesitate to share his view on rival factions’ approach to North Korean issues, the distinctive difference of which has long been a key characteristic of local politics.

“While the former President Park’s ‘reunification bonanza’ theory makes no sense whatsoever, the sunshine policy pursued by the former liberal Presidents Kim Dae-jung and Roh Moo-hyun could also be seen as too idealistic,” he said.

Park stressed the need for reunification with the North, describing enormous benefits it would bring as “bonanza” in one speech, while sticking to a hardline stance on the communist regime’s military programs and shutting down all inter-Korean cooperation projects.

The projects were initiated by the liberal leaders who sought to reengage the reclusive and internationally-isolated North.

When it comes to policy priorities, a well-balanced politics and economy of South Korea should always come first, Kim stressed, claiming that the unification of Korean Peninsula is not up to Koreas, as the South-North division was not in the first place.

“South Korea cannot decide on reunification on its own. The division occurred because of other countries in the first place, and (to end the current state of division), the consent of all interested nations is critical,” he said.

Germany’s unification case is different and cannot be benchmarked, he added. East Germany’s main backer – the Soviet Union – was weakened, which allowed the unification to happen.

But in the case of North Korea, the main backer – China – stands firm. As long as China wants the status quo in the peninsula, unification will be a tall order for South Korea, Kim said.