[Video] ‘The King’ delves into mania of power and corruption: Herald Review

What is it like for a person of power to live in Korean society?

Apparently, it’s like being royalty, according to director Han Jae-rim’s latest flick “The King.”

He reigned over fellow students with his fist before he caught a glimpse of what he called “real power” -- the sight of his thug father being beaten up by a pencil-neck prosecutor. It was then that he decided to pursue a career in law.

“I first came up with the idea for the movie by questioning, ‘Is there another country like Korea where it is so easy for a person with power to live?’ Instead of focusing on the fury of victims, I tried to depict a powerful man’s point of view,” said Han on Thursday after a press screening of the movie at Lotte Cinema in Jayang-dong, Seoul.

“I tried to depict the process of a man rising to the throne, the power.”

Zo In-sung, making a return to the silver screen for the first time in nine years, plays the main character who forgoes a sense of justice to indulge in power throughout decades.

“I didn’t focus too much on the changes the character goes through, but on the events he experiences and the people he meets. I was careful not to portray him too lightly or too seriously, because I needed to make sure the audience could connect with him,” said Zo.

As a rookie prosecutor, Park attempts to incarcerate a pedophile sex criminal who has a powerful former lawmaker for a father. He then realizes that the criminal is connected to Han, and is persuaded to stand down in exchange for becoming acquainted with him.

Jung Woo-sung plays the powerful prosecutor Han who “corrupts” Park. He said he wanted to portray a person who anyone could become.

“We all have an experience witnessing what can happen when powerful people take sides with certain individuals. A prosecutor takes an oath before being appointed, one takes the job with a sense of conscience and honor,” he said.

“I wanted to depict what ugly form emerges when one compromises within the system. ... I wanted to portray a person who makes a wrong choice that everyone is aware of,” he said. 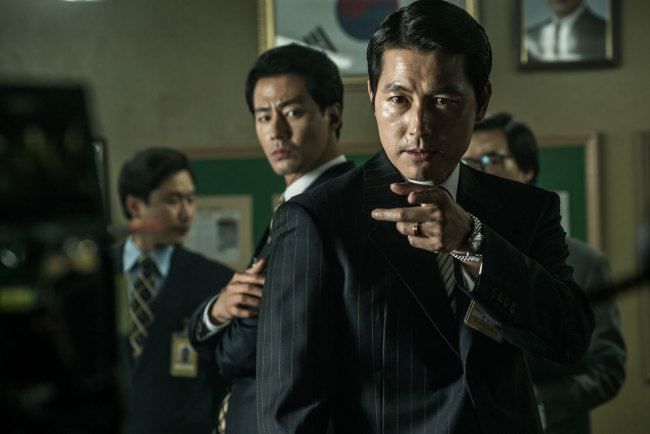 With men of law on one side, another side is portrayed through gangster Choi Doo-il, who is Park’s childhood friend.

First appearing as a hired thug for Han, Choi uses his friendship with Park to become “too big” for the corrupt prosecutors’ good.

Ironically, in a scene where he is chased down by police officers, it is impossible to differentiate between officers of the law and rival gang members.

“(Han) and I agreed that sometimes prosecutors look like gangsters and gangsters, prosecutors. So I tried to portray an atypical gangster who has both sides,” said Ryu Jun-yeol, who plays Choi.

The movie takes somewhat of the traditional route of good and evil, and attempts to convey a message of hope in what resembles the network of corruption that is so apparent in Korean society.

“The message I wanted to deliver was hope, a sense of ownership (among citizens). We saw what power of the people did to scandals last year. I hope the ending will spark the belief among the audience that maybe we can get something done,” he said.

Jung Woo-sung trips while entering for a photo session.