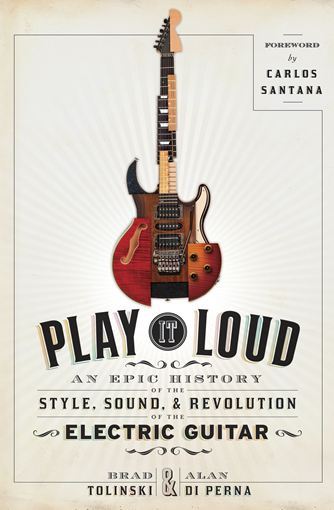 Doubleday (379 pages, $26.95)
The scream of the electric guitar was the dominant soundtrack of the 20th century.

First developed to provide louder rhythm backup for big bands of the Swing Era, the electric guitar then killed the big bands, feasted on their corpses and looked for its next victim.

Like Brando slouching against a jukebox in “The Wild One” -- a movie that came out just as the electric guitar was taking over the music world -- it’s an instrument that asks “Whaddya got?” and then rebels against it.

In “Play It Loud,” a lively and fascinating history by Brad Tolinski and Alan di Perna, the authors combine technology, sociology and musicology to explain why this instrument assumed such a commanding position in the music world and in American culture.

“There are few greater, more prevalent modern icons,” the authors write. “Its inventors’ ambitions may have been modest, but the instrument they conceived -- visually striking in appearance, utterly practical in its application -- would leave an indelible imprint on our history.”

The book is a sweeping yet detailed account of the instrument’s history, working as well at an “11” volume level as it does at “1.” Famous names pop up throughout: the genius tinkerers who created the instrument and the artists who played it. (TNS)