On Aug. 8, Hyundai Motor’s North American corporation announced the beginning of sales there with a media test drive for its mid-sized luxury sedan, the G80. The new flagship G90 will be launched overseas in September.

Genesis is Hyundai Motor’s answer to a luxury lineup, marking the carmaker’s desire to evolve into a high-end brand in the face of declining sales both at home and abroad.

Further, for Hyundai Motor heir Chung Eui-sun, 47, the Genesis will define his leadership, as he is poised to eventually take over Hyundai Motor from his father Chung Mong-koo.

“The Genesis will be the ultimate litmus test for Chung Eui-sun’s leadership, and whether he is capable of leading Hyundai into the future,” said one industry watcher, declining to be named.

Chung Mong-koo took it a step further, ushering in the golden era of Korean cars with the Hyundai brand, which eventually merged with Kia Motors to create a giant firm.

Now, it’s up to Chung Eui-sun to keep the brand alive amid intensifying overseas competition and a slowing global economy.

The brand Genesis has Chung Eui-sun’s handprints all over it. Granted, his father appeared to be leading its birth, but Chung was the one who oversaw all the details.

It was also Chung who announced the release of the Genesis at the Detroit Motor Show in January this year, and was placed in charge of shaping all the overseas sales strategies. 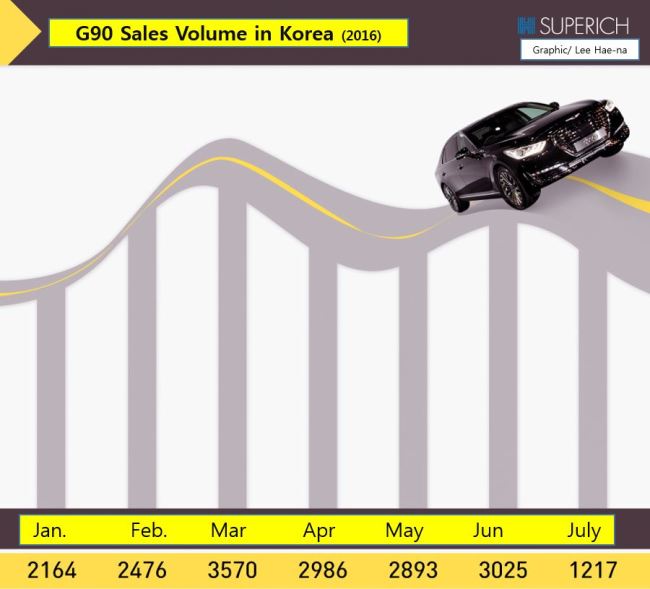 Earlier this year, Chung stepped into the Hyundai Motor studio -- which serves as a museum and showroom -- in southern Seoul with around 20 overseas VIPs: representatives from US dealerships.

“I invited them to see the studio for themselves,” the vice chairman told Herald Business. “And this is only the beginning. The US is the start, and there is the Middle East. We have many places to go to.”

Regarding the US, Chung said his team was analyzing sales strategies for maximum results.

Hyundai is expected to handpick dealerships to sell the Genesis, and also set up separate showrooms for the lineup.

At home in Korea, the G90 sold 17,986 units from December in 2015 into the first six months of this year. That surpassed the 16,274 units for the Equus, a previous premium Hyundai model. It was also more than the goal of 14,000 units Hyundai had set at the time.