By Korea Herald
Published : May 6, 2015 - 18:35       Updated : May 10, 2015 - 15:25
Teenagers huddle in the subway, taking a selfie while raising two fingers in a peace sign. A man dunks a soju shot into his beer glass, then puts up a hand to cover his mouth as he laughs at his boss’ joke. Middle-aged delivery ladies carry trays full of dishes on their heads, nonchalantly strolling along as if simply wearing a hat.

If you are a foreigner roaming the streets of Korea, these are sights that would have drawn your attention and caused you to tilt your head in curiosity and, perhaps, befuddlement.

“Sketches of Korea: An Illustrated Guide to Korean Culture” explains all of the above and more.

Including everything from everyday tidbits to history, art and even the science behind the Korean alphabet, this new book written and illustrated by two French Seoulites, Benjamin Joinau and Elodie Dornand de Rouville, is a comprehensive English-language manual for those interested in learning about the less polished, everyday aspects of Korean culture.

The aim was to create a useful and entertaining book that deals with cultural habits foreigners would genuinely find interesting, said Benjamin Joinau, author of the book and professor of culture and civilization at Hongik University.

“Existing books on Korea tend to focus on politically correct items that Korean people want to present to the world,” Joinau said. “If you read these books, you get the impression that Korean people are all still living in hanok houses, dressed in hanbok. 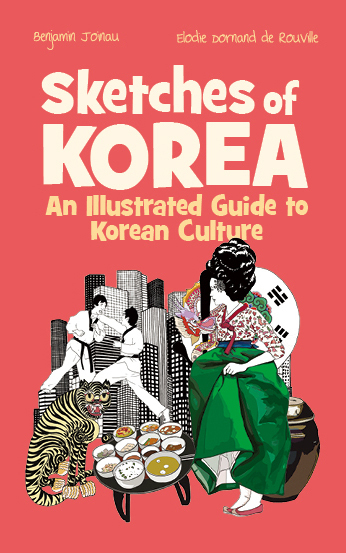 “But Korea is a much more complex and modern society, and we wanted to show the real, everyday life here. The less traditional, less polished aspects can be more fun and more remarkable to the foreign eye.”

With a Ph.D. in Korean Studies from the School for Advanced Studies in the Social Sciences in Paris, Joinau is considered in the French community to be the go-to Korea guru.

Upon his inadvertent arrival here 21 years ago through a government program, Joinau has undertaken many ventures, including a trendy French restaurant in Itaewon called Atelier du Saint-Ex and a French publishing house, Atelier des Cahiers, which deals with books on Asian culture and society. He has also written numerous essays and articles on Korea and researched at the Kyujanggak International Center for Korean Studies at Seoul National University.

“There are certain things that seem natural to Korean people yet are so strange to foreigners,” Joinau said. “Like old ladies selling vegetables on the streets or people walking around in striped slippers. I think a lot about Korean culture can be explained from exploring these customs.”

Divided into five chapters ― social, cultural, artistic, traditional and spiritual ― the book explains the distinctive facets of Korean life. The warm ondol floors of houses, the towering modern apartments, the snacks and drinks of pojangmachas ― tented food stalls on the streets ― and how to enjoy mokyoktangs and jimjilbangs ― public baths and saunas ― are all there, aided by expressive illustrations.

Elodie Dornand de Rouville, the book’s co-author and illustrator, said she closely observed her Korean friends and neighbors to capture their facial expressions and gestures in her detailed drawings.

A graduate of Paris’ National School of Fine Arts, Dornand de Rouville first arrived in Korea in 2002 as an exchange student to Hongik University. She met and married photographer Oh Seung-hwan and has been living in Korea for 10 years, actively pursuing her art and putting on numerous exhibitions ― most recently “The Shadow of a Star” at the Zaha Museum.

Complete with an index, the book hopes to serve as a handy 211-page encyclopedia of Korean culture.

“It’s not a social commentary; our aim was not to analyze or judge the society in any way, but simply to introduce a series of interesting facts and images,” Joinau said.

He also noted the difficulty of capturing the fast-paced evolution of Korean culture.

“We hope to be able to continually update in future editions, because Korea’s culture is constantly changing at a rapid pace.”

The book is priced locally at 12,900 won and will be available at large bookstores both in Korea and the U.S., as well as online at seoulselection.com and amazon.com. A French translation is also in the works, tentatively scheduled for release in late 2015 or early 2016.

A book signing will be held on May 15 at 6 p.m. at the Paik Hae Young Gallery in Seoul, alongside the opening of “Traversee,” an exhibition by Dornand de Rouville.