‘How to Be Both’ offers two stories with playful cleverness

By Korea Herald
Published : Jan 1, 2015 - 20:35       Updated : Jan 1, 2015 - 20:35
Ali Smith is a playful writer, but her sense of fun thrives in unlikely places. It’s evident in the language of the terrible death of the young chambermaid in a dumbwaiter in Hotel World (“Woooooooo-hooooooo what a fall what a soar what a plummet what a dash into dark into light what a plunge what a glide thud crash what a drop what a rush what a swoop what a fright what a mad hushed skirl what a smash mush mash-up broke and gashed what a heart in my mouth what an end.”)

It’s there in the title and subject matter of her last novel, “There but for the,” about a man invited to a dinner party who locks himself in a bathroom and refuses to leave, becoming a minor celebrity in the process.

It’s here in the clever structure of her latest novel, a wonderfully slippery, postmodern examination of the perception, gender, loss and the lasting power of art. How to be both is split into two narratives ― the present-day “Camera,” from the viewpoint of a teenage girl in Cambridge, and “Eyes,” narrated by a 15th century Italian artist. Half of the printed books start with one story, the rest with the other. Which comes first? Depends on the luck of the draw. Do readers of one version glean different insights or the same insights in a different order? Does it matter? Smith’s advice on the matter is sage: Pay attention. As one of her characters says, “(T)here’s always more to see, if you look.” 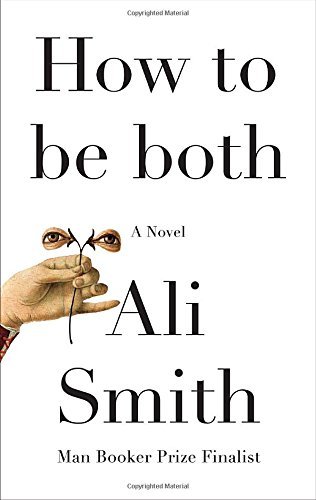 Which is not to say that “How to Be Both” is merely an exercise in literary trickery. Smith’s technique is bold and experimental, but what makes her work so rare and desirable is that it always contains a moving emotional core. Her novels may stretch stylistic boundaries, but they also compassionately, even tenderly, explore the universal perils of being human.

The narrators in “How to Be Both” experience tragedies that link them, both losing their mothers at early ages. “This will be the first year her mother hasn’t been alive since the year her mother was born,” thinks contemporary George, whose grief is bleak and bottomless. “That is so obvious that it is stupid even to think it and yet so terrible that you can’t not think it. Both at once.” Such duality is an ever present theme.

Stuck in a gloomy present, George is preoccupied with the past. George’s father is drinking to cope, her little brother sad and lost. Doomed to sessions with a school counselor, George revisits conversations with her mother, who was a subversive Internet presence and loved discussions of morality, language, culture. Observing her daughter’s tendency to do several things at once, she says, “You’re a migrant of your own existence.” (Not says. Said. George’s mother is dead.)

Another thing George can’t forget: Her mother’s admiration for Italian painter Francesco del Cossa, whose work they saw together in Italy. One of the artist’s works is in a gallery right there in town. Soon George is skipping school to visit it every day. What she doesn’t know is that the painter’s spirit somehow has attached itself to her.

The narrative of Francescho ― the fictional version of the artist adds an h ― starts with a stream-of-consciousness whoosh but settles into a somewhat more traditional format, wandering back through childhood and young adulthood, from days growing up in a bricklayer’s house to painting frescoes at a palazzo in Ferrera. In death, Francescho is best known as the single artist who had the courage to ask for higher wages.

For whatever purgatory this is, Francescho is sure, it involved death, because no one escapes the inevitable end to the passage of time.

Slowly, Smith teases out Francescho’s secret (one presumably not shared with the painter’s real-life counterpart). The revelation almost undoes Francescho’s best friend, a rich boy named Barto: Francescho is a woman (a fact discovered first, in one of the novel’s most amusing scenes, by a delighted prostitute in the local brothel).

“How to Be Both” is a complicated book and a simple one, deliciously cunning but also gentle in delving into the hearts and minds of its two protagonists, linked by death, by art, by mystery. “The word mystery originally meant a closing, of the mouth or the eyes. It meant an agreement or an understanding that something would not be disclosed,” George’s counselor tells her. “The mysterious nature of some things was accepted then, much for taken for granted. ... But now we live in a time and in a culture when mystery tends to mean something more answerable, it means a crime novel, a thriller, a drama on TV, usually one where we’ll probably find out ― and where the whole point of reading it or watching it will be that we will find out ― what happened. And if we don’t, we feel cheated.”

Smith does not leave you feeling cheated, but “How to Be Both” strikes me as the sort of book you could happily read a second time and uncover overlooked truths. In art as finely crafted as this, there’s always more to see, if you look.