In the first half of the year, there were lingering rumors that Cha could leave the firm at the year’s end as he has already stepped down from the CEO post at the company’s flagship beauty brand The Face Shop. He also sold his shares in the firm ― 22,000 ― to pocket about 11 billion won ($9.8 million) of funds in June.

“The board’s decision on his extension has cleared all such rumors in the market,’’ a company official said.

The 61-year-old executive is one of the longest-surviving CEOs in Korea. He joined the household goods and beauty product unit of LG Group as CEO in December 2004 and took over as vice chairman in December 2011.


Before joining the LG Group as a professional manager, Cha had led the Korean branch of Procter & Gamble and Haitai Confectionery & Foods.

Corporate information provider CEO Score observed that as of 2014, Cha is one of the two non-founding family member CEOs here who has served as a chief executive for more than a decade. The other is Doosan Oricom CEO Ko Young-sub.

“One of the most important factors in Cha’s longevity as a CEO is his performance,’’ state-funded KDI Graduate School said in a recent study on executive careers.

LG Household & Health Care, once a local household goods maker, has transformed into a global beauty and personal care company over the past decade.

To trigger such growth, Cha had early on decided to expand its business domain into cosmetics and beverages, going beyond household goods, by benchmarking P&G’s growth strategies.

To expand the business in a relatively short period time, he turned his eyes to merger and acquisitions. Since his company took over Coca-Cola Korea Bottling for 385.3 billion won in 2007, he has sealed a total of 13 merger deals, including the takeover of The Face Shop, a local beauty brand chain, in 2010.

“After this, he reorganized the company’s business operations into household goods, beauty and beverage, and encouraged competition between the three,’’ a corporate insider said.

Based on the changes in business portfolio and operations, the company set records in growth, achieving a double-digit growth in sales and operating profit for 27 quarters in a row since 2005. 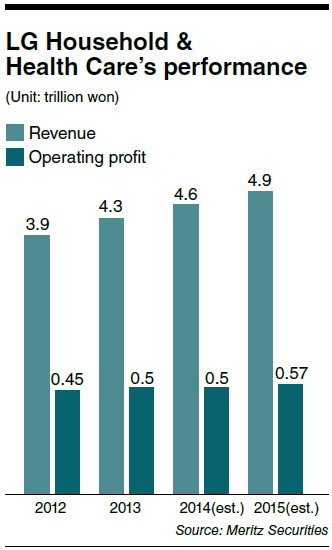 The business success turned Cha into one of the nation’s best paid CEO.

In the cosmetics sector, Cha’s paycheck, which comprises of basic wages and incentives, was the second highest after AmorePacific Group Chairman Suh Kyung-bae. In 2013, Suh earned 1.9 billion won and Cha 1.5 billion won, according to legal filings to the financial watchdog.

Korea Investment & Securities forecast Cha’s success story will continue for the time being, based on the continued steep growth in the firm’s beauty business.

“The growing popularity of LG beauty products among Chinese consumers has lifted the firm’s sales and operating profit to record highs of 1.2 trillion won and 150 billion won, respectively, in the third quarter,’’ the brokerage firm said in a recent report.

“The proportion of beauty product sales in the firm’s total revenue will continue to rise, reaching up to 53 percent in 2015.’’