‘Some Luck’ takes on an epic scope

By Korea Herald
Published : Nov 13, 2014 - 20:37       Updated : Nov 13, 2014 - 20:37
Sometimes, the characters in Jane Smiley’s latest novel resemble the Osage-orange hedge that separates the field from the back acreage of Walter Langdon’s Iowa farm: “horse-high, bull-strong, and hog-tight.” Meaning they’re tough. Meaning they take what life throws at them ― drought, freezes, economic catastrophe, death, war, progress ― and carry on. Meaning any sense of optimism is hard won and that good fortune is never taken for granted: “That was a piece of luck, Walter. But what would we do without some luck after all?”

The first novel in a trilogy ― the New York Times reported recently that the diligent Smiley has already completed the second and third books, too ― “Some Luck” examines the lives of an Iowa family year by year. Smiley’s plan is to cover 100 years of American history a chapter at a time. 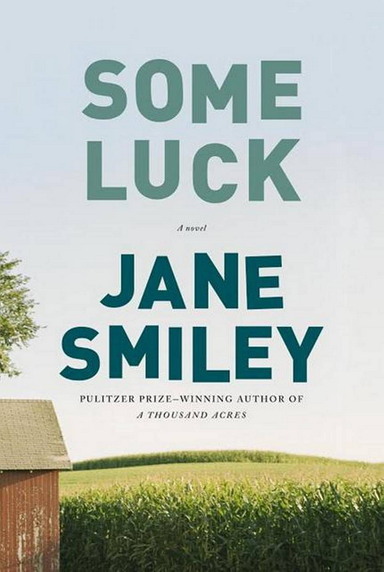 But despite its ambitious, epic scope, which embraces political and social changes, “Some Luck” is also intimate and deeply observant yet never too reverent. “When you first walked onto your place, you were so glad to have it that everything looked good. Or perfect,” family patriarch Walter muses. “Then year by year ― it had been six years now, six springs, summers, falls and winters (mud, heat, exhaustion, snow) ― all the extra steps began to tell on your affections.”

The novel opens in 1920 and ends in 1953: Thirty-three years pass, and no event is too small to escape Smiley’s notice. An absorbed baby plays with a spoon. A soft-hearted boy mourns the deaths of unwanted puppies. Walter Langdon dreams of oats and more oats (“It was natural to plant oats, eat oats, feed oats, bed oat straw, and most of all, enjoy all the stages of oat cultivation.”) Smiley reflects the minutiae of everyday life on the farm, where time is measured in bushels produced or animals milked or sheared or slaughtered.

Sifting through such ordinary detail may sound a bit enervating and not at all the stuff of great drama. But Smiley, who has mined the heartland for material before in the academic satire Moo and her Pulitzer Prize-winning “A Thousand Acres,” uses the small moments and events to build a bigger, multifaceted picture of a country during decades of great change. What seems simple at first grows profound in her hands, people and places and events shaded and nuanced by the passage of time ― and her skillful prose.

Characters, of course, are Smiley’s specialty (if you don’t believe that, read her novel “Horse Heaven,” in which even the horses and a cheeky dog named Eileen bear distinct, engaging personalities). With plain materials she builds rich portraits of her Langdons. Walter, a born farmer and a 25-year-old father when the book opens, is married to Rosanna (“just twenty, but with the self-possessed grace of a mature woman!”). Their five children ― Frank, Joe, Lillian, Henry, Claire ― are rendered in vivid, indelible strokes.

The younger Langdons will likely play larger roles in the later books. In Some Luck, the most intriguing child is Frank, the eldest. Curious, bold, stubborn and smart, Frank is the beloved golden child though he’s as emotionally distant as his animal-loving brother Joe is sensitive. There’s no mystery as to which brother will keep the Langdon farm going, updating it with common sense and technological advances, and which brother will venture out into the world. Which isn’t, Walter muses, necessarily a bad thing: You think of wanderers like Frank as “runaways, and then, after a bit, you knew they were really scouts.”

Frank’s entry into the military as a sharpshooter in World War II allows Smiley into a world of warfare and violence, but she doesn’t need obvious drama to construct straightforward but unforgettable scenes of loss. She’s especially graceful evoking a rare moment of content, when all the struggles and resentments burn away to reveal something wonderful to the middle-aged Rosanna.

“She could not have created this moment, these lovely faces, these candles flickering, the flash of the silverware, the fragrances of food hanging over the table, the heads turning this way and that, the voices murmuring and laughing. She looked at Walter, who was so far away from her, all the way at the other end of the table. ... They agreed in that instant: something had created itself from nothing ― a dumpy old house had been filled, if only for this moment, with twenty-three different worlds, each of them rich and mysterious.”

Such a simple, remarkable scene ― nothing fancy, just a loud, large family gathered for a meal ― leaves you with that warm, familiar feeling you get when you flip through old family photo albums, marveling at the alien past. In “Some Luck,” Smiley brings that past to life. You don’t have to have been raised on an Iowa farm to think: That sounds like my grandmother, my aunt, my father, my brother. That sounds like us.