Fashion, food and JYJ in Gangnam

Festival to celebrate hallyu culture from Thursday to Sunday

In its eighth year, the Gangnam Festival celebrates hallyu culture, featuring K-pop group JYJ, top fashion designers and stores from the district’s hip and trendy Garosu-gil street. It also invites expats, foreign tourists and local residents to run together in a charity marathon. In celebration of the festival, department stores, hotels, restaurants and cultural centers in the district will offer discounts of up to 60 percent.

“The Gangnam Festival has evolved from a local festival to an international celebration of hallyu, fashion and culture. I hope the district of Gangnam will gain a reputation as the destination for ‘hallyu tourism,’” said Shin Yeon-hee, mayor of Gangnam-gu.

Gangnam gained worldwide attention when it was featured in Psy’s “Gangnam Style,” whose music video has hit 1 billion views on YouTube.

The festival will start with a fashion event on Thursday, featuring the works of young, established and international designers. Twenty teams of young designers will showcase their creations and compete in a fashion contest. 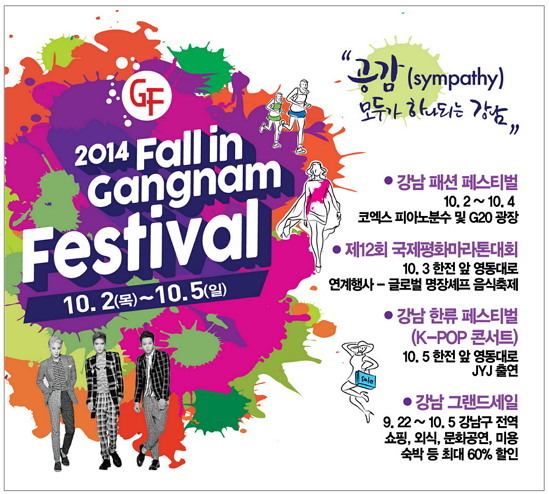 On Friday, Korean designers and shops on Garosu-gil will present a trend show to introduce the latest fashion and accessory trends. Renowned menswear designer Jang Kwang-kyo of CARUSO will showcase his creations at the show.

Top Chinese designers from Beijing, Shanghai and Hong Kong will wrap up the fashion festival on Saturday, bringing their creations to the stage. To heighten the festive mood, residents in the Gangnam district will participate in a separate fashion show, showcasing diverse traditional costumes from around the world. For more information about the fashion festival, visit www.fashionfestival.or.kr.

The festival will also host the 12th International Peace Marathon, which is expected to draw more than 15,000 participants, including running enthusiasts, U.S. servicemen stationed in Korea and local and foreign residents.

The marathon will start at 8 a.m. on Yeongdong Boulevard in Samseong-dong on Friday. Participants can choose to run the full course, half course, 10 km or 5 km courses. Proceeds from the marathon will be donated to UNICEF and the Community Chest of Korea.

The street in front of the Korea Electric Power Corporation headquarters will turn into an outdoor restaurant after the marathon. Chefs from popular local restaurants will come out and serve their signature dishes from 10 a.m. on Friday.

The highlight of the festival is the JYJ concert starting at 7 p.m. on Sunday at a special outdoor stage on Yeongdong Boulevard. The scale of the concert is unprecedented as the entire seven-lane boulevard will be blocked for the two-hour concert. Started in 2011, the K-pop concert has featured top K-pop stars such as Rain, Super Junior, Girls’ Generation, TVXQ, EXO and SHINee.

The Gangnam Grand Sale will be held throughout the festival, offering discounts of up to 60 percent at major department stores, hotels, restaurants and cultural centers in Gangnam. Discount coupons are available for download at the Gangnam District Office website (www.gangnam.go.kr). Coupon books are offered for free at the Gangnam Tourism Information Center as well.