Over 5,000 participants to discuss peace on Korean Peninsula, diversity and love

More than 5,000 participants including 800 Christian delegates, several leaders of the Roman Catholic Church, Orthodox churches and Islam will explore Christian unity, justice and peace at the World Council of Churches 10th Assembly. 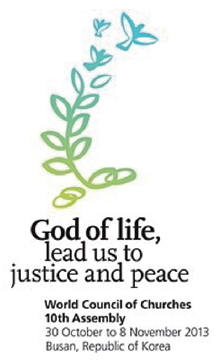 “It is an Olympics for Christians,” a member of the organizing committee said.

Among the 2,800 foreign attendants are 2011 Nobel Peace Prize laureate Leymah Roberta Gbowee; leaders of the Syrian and Armenian Orthodox churches; Kurt Cardinal Koch, president of the Pontifical Council for Promoting Christian Unity; Brother Alois, prior of the Taize Community; Justin Portal Welby, Archbishop of Canterbury and senior bishop in the Church of England; Din Syamsuddin, representative of the Indonesian Ulema Council, a Muslim organization; and leaders from several different religions, who will attend the opening ceremony on Oct. 30.

During the event scheduled through Nov. 8 at Bexco, the participants will also discuss 21 issues including the ecumenical solidarity for justice and peace on the Korean Peninsula; overcoming greed to eradicate poverty; the community of women and men in the church; sustaining peace with justice and human rights and justice in the Middle East. They will also issue a statement on the freedom of religion and rights of all religious communities in the context of politicization of religion; just peace; and human rights of stateless people.

The attendants will also have a chance to experience diverse aspects of Korean culture at “madang” composed of 119 different cultural activities including performances, workshops and tour programs.

Korea is the first Asian country to host the event that is held every 7-8 years on different continents. Korea has been a member of the WCC since 1959.

“The WWC was established in 1948 after Europe was torn apart by the two world wars. Currently, Korea and Palestine are two regions that are still separated due to conflicts, and it seems that the international community acknowledges the importance of Korea in such context,” he said.

About 130 participants have started a “Peace Train” campaign from Germany to Beijing seeking peace between the two Koreas. The WWC headquarters requested that the two Koreas open up railways so that participants can travel to South Korea via North Korea. However, insiders admit that the chances of this being realized are very slim.

“Another thing is that Christianity is still going strong in Korea. While most Western countries are seeing a dramatic decline in congregations, Korea, which accepted Christianity only about 130 years ago, has six of the 10 largest churches in the world. And people find that amazing,” Cho said.

Hosting the WCC in Korea has brought about some dissension among churches here, with a group of 71 conservative churches planning to protest in front of the event venue from the opening day.

Claiming that WCC has been “tainted” by pluralism embracing different gods, communism, homosexuality and other lifestyles that are condemned in the Bible, the group held a protest in front of the WCC headquarters in Switzerland and is planning a large-scale vigil in front of Bexco in Busan.

“Religious pluralism is heresy, denying the authority of the Bible, and is an Antichrist scheme aimed at rooting out Christianity,” said Song Chun-gil, a representative of the group opposing Korea’s hosting of the WCC.

The World Council of Churches, a worldwide fellowship of churches seeking unity, a common witness and Christian service, has been at the center of controversy for its open attitude toward other beliefs.

The most noticeable incident was the issuance of the “Baar Statement” in 1990 which says, “Today our greater awareness and appreciation of religious plurality leads us to move in this ‘common adventure’ toward a more adequate theology of religions. There is a widely felt need for such a theology, for without it Christians remain ill-equipped to understand the profound religious experiences which they witness in the lives of people of other faiths or to articulate their own experience in a way that will be understood by people of other faiths,” resulting in fierce protests from conservative Christians.

“There have always been such opponents. But I don’t really take it too seriously. We are not seeking pluralism that is against our belief. We are talking about respect, learning about each other,” Cho of the organizing committee said.