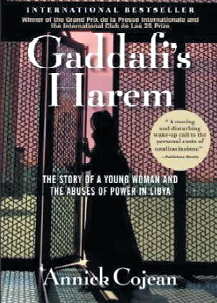 Gaddafi’s Harem: The story of a Young Woman and the Abuses of Power in Libya
By Annick Cojean
(Grove Press)

The first half of this deeply disturbing book is one woman’s account of how Moammar Gadhafi forced her, when she was barely 15, to become his sex slave, keeping her and other victims imprisoned for years. He summoned them to his bedchamber day and night, where he drugged them, beat them, raped them and sodomized them.

The woman, Soraya, said that Gadhafi chose his victims by strolling through schools, wedding celebrations and beauty salons and signaling his preference to his guards.

Her story is harrowing, if not immediately convincing. It is written in first person, in Soraya’s voice, pieced together from a series of lengthy interviews conducted in 2012 by French journalist Annick Cojean. Soraya’s words have been translated from her native Arabic into Cojean’s native French, and then translated again from French into English, and the result is somewhat stilted. (“‘Ah!’ he roared. ‘Come and dance for me, my little whores! ... Come here, my little slut!’”)

Cojean broke this story in 2011 in the newspaper Le Monde, then returned to Tripoli for deeper reporting. In the second half of the book, she makes her case solidly. She interviewed teachers, principals, government workers, soldiers, journalists, professors and doctors. She also interviewed woman after woman after woman, all of whom had been raped and brutalized by Gadhafi or his men.

The torture, Cojean learned, went far beyond Gadhafi. He kept huge stockpiles of Viagra ― not just for himself, but for his soldiers. “In Benghazi, Masrata, Zuwarah, and even in the mountains. They were everywhere that his militia had been stationed.”

Rape was used widely as a political weapon and a tool for blackmail. “He governed, humiliated, subjugated and sanctioned through sex,” a former adviser told Cojean.

“Sometimes the whole family was raped,” a soldier told her. “Eight- or 9-year-old girls, young women of 20, their mother, sometimes in front of a grandfather. ... I can still hear their screams. I can’t tell you how much they suffered.”

Even though Gadhafi is dead, it remains dangerous for these brave women to speak out; in Libya, women who have sex outside of marriage ― even against their will ― bring deep shame to their families and are at risk of being killed by their father or brothers.

Cojean’s dogged reporting leads us to the same sad path the world has trudged down before. It is always the weakest ― the poor, the women, the children ― who suffer the most. The book ends with little optimism. “Throughout the world women will continue to keep silent. Shameful victims of a crime that turns their body into an object of conquest, the spoils of war.” (MCT)