The Ephron sisters, united by words 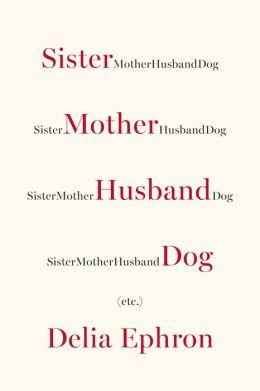 When filmmaker and writer Nora Ephron was in the hospital last year undergoing treatment for leukemia, she sent her younger sister, Delia Ephron, a bouquet of flowers ― not just any flowers, but “two-dozen gorgeous plump peach roses in full bloom,” as Delia recalls in her new essay collection, “Sister Mother Husband Dog: Etc.”

The gesture was thoughtful, but it was also, according to Ephron, “a heartbreaking way to have a bit of control” ― a move typical of a perfectionist who was “brilliant at giving” but impossible to please when she was on the receiving end.

The loving if not uncomplicated relationship between the two sisters ― both screenwriters and journalists, as well as discriminating foodies and die-hard New Yorkers ― is at the center of this slim volume.

“We borrowed lines from each other the way other sisters borrow dresses,” Ephron writes. That suggests an easy give-and-take, but as any woman with a sister can attest, many a bitter fight has been waged over borrowed clothing. Add to that the particular cruelties of show business, and you have a fraught mix.

Although the pair collaborated fruitfully many times over the years, beginning with “This Is My Life” and ending with a TV pilot they crafted during Nora’s final weeks in the hospital, Ephron writes with piquant honesty about the difficulty of having such a renowned sibling. “My ‘job’ as a younger sister was not to imitate but to differentiate,” she says. It’s evident this task wasn’t always an easy one.

Ultimately, though, Ephron is defensive of her sister, a resilient woman subjected to fiercer scrutiny than her male contemporaries in the film business. She even sees something faintly regressive in the outpouring of affection that followed Nora’s death because, unlike the flops “Bewitched” and “Lucky Numbers,” it was impossible to “bounce back from.”

The event, still fresh, has left her reeling, and Ephron writes of her mourning process in the present tense. “It’s a whole new world in an awful and confusing way,” she says. “A city in which the street signs are missing.” That’s not to suggest time will necessarily heal the wound. In the book’s most gripping and emotionally raw essay, called “Why I Can’t Write About My Mother,” Ephron paints a vivid portrait of her parents, screenwriters Henry and Phoebe Ephron.