The characteristic symptoms of vaginitis include itching, discharge, odor, pain during intercourse, and painful urination which are common symptoms that women visit gynecology clinics for.

Bacterial vaginosis is the most common cause of vaginitis. It is not an infection by specific bacteria, but rather caused by changes in the composition of microorganisms in the vagina. 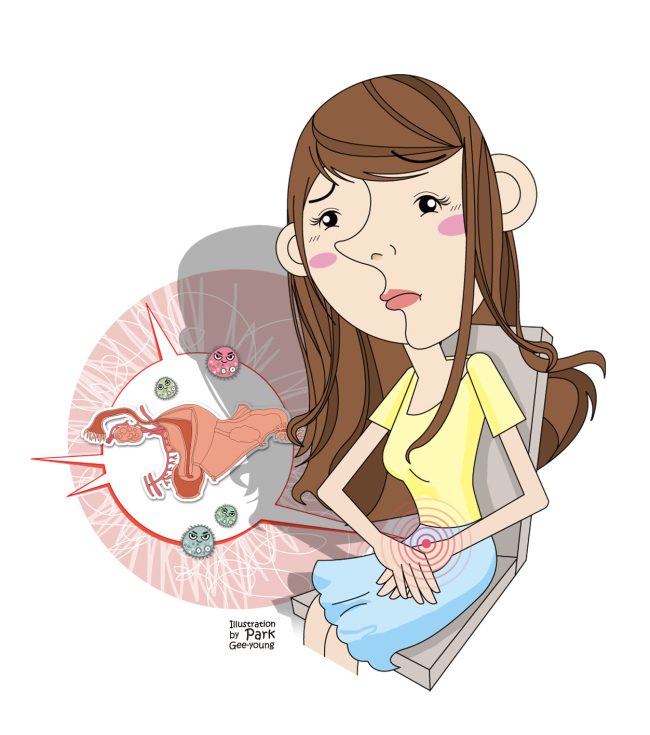 Generally, there is an increase in anaerobes such as Gardnerella, but there is a decrease in the concentration of Lactobacillus acidophilus, which maintains the acidity of the vagina and prevents excessive growth of harmful microorganisms. Bacterial vaginosis is not a sexually transmitted infection, but is associated with endometritis, salpingitis and pelvic inflammatory disease. In particular, it can increase the risk of preterm rupture of the membranes, preterm labor and preterm birth in pregnant women. Hence, early diagnosis and treatment is important.

The diagnosis is made by inspecting the vaginal discharge and microscopy, and the effective treatment is an antibiotic called Metronidazole.

Trichomoniasis is a genital infection by protozoa, and is characterized by frothy, odorous vaginal discharge, which is yellow or green in color. Examination of vaginal discharge will reveal active protozoa in 70 percent of cases.

Trichomoniasis is very contagious, so both the patient and the partner must be treated. As with bacterial vaginosis, it increases the risk of preterm birth in pregnant women. It is effectively treated by Metronidazole, but the gel type is not recommended as it is less effective.

A vulvovaginal infection by Candida, often referred to as thrush, is a very common condition where approximately 80 percent of women are infected at least once in their lifetime, with about half of these women experiencing recurrences.

The risk increases in pregnant women, diabetic patients, and those taking prolonged courses of antibiotics. It is characterized by pruritus and discomfort in the vulva, redness, swelling, and cheese-like discharge. Many cases can be diagnosed by history taking and physical examination and the diagnosis can be confirmed by microscopy. If symptomatic, the condition can be treated by oral, transvaginal or ointment antifungal agents.

Cervicitis is another type of lower reproductive tract infection. It is often associated with purulent cervical discharge and vaginal bleeding. The main pathogens are Chlamydia trachomatis and Neisseria gonorrhea. Of these, Chlamydia trachomatis is the most commonly reported sexually transmitted infection, and young women, women of lower socioeconomic status, women with multiple sexual partners, and unmarried women have a higher risk of infection. However, up to 75 percent of infected patients remain asymptomatic, so tests should be done if it is suspected. The treatment can be started first according to the clinical findings, and when treating the patient, co-infection with gonorrhea must also be considered. The symptoms of gonorrhea are similar to those of chlamydia infection, and 50 percent of infected patients are asymptomatic.

Pelvic inflammatory disease is a complex infection of the uterus, or its associated organs (the fallopian tubes and the ovaries), which spreads from the cervix. It is commonly associated with lower reproductive tract infections, but bacteria in the body other than Chlamydia trachomatis and Neisseria gonorrhea can also cause this disease. There are no specific symptoms or signs, but patients often complain of abdominal and pelvic pain. Other symptoms that can occur include vaginal discharge and bleeding, dyspareunia and fever.

A quarter of women who have had PID can develop infertility, ectopic pregnancies and chronic pelvic pain later, so it is very important that the patient and her partner are treated appropriately and as soon as possible. It is also important to educate the patient to prevent recurrence. If PID is suspected because of pain, fever, abnormal discharge, or elevated inflammatory markers, empirical broad spectrum antibiotic treatment is started to prevent chronic complications. Many patients can be treated as outpatients, but those who are pregnant, those who do not respond to oral antibiotics, and those who need surgical treatment need to be admitted to the hospital.

In conclusion, female reproductive tract infections are common, have a high rate of recurrence, and can lead to chronic complications if not treated appropriately. Therefore, it is important to identify the symptoms and signs associated with infection, and be treated by your doctor if necessary.

The author is a doctor at Department of Obstetrics & Gynecology at Samsung Medical Center and a professor of Sungkyunkwan University School of Medicine. ―Ed.