Some 75 shows will be presented by both established and up-and-coming designers during the week-long celebration of fashion.

Some of the leading designers participating include Lie Sang Bong, Gee Chun-hee, Chang Kwang-hyo and Song Zio, while 12 young designers will present their innovative designs and creativity at the “Generation Next” shows. 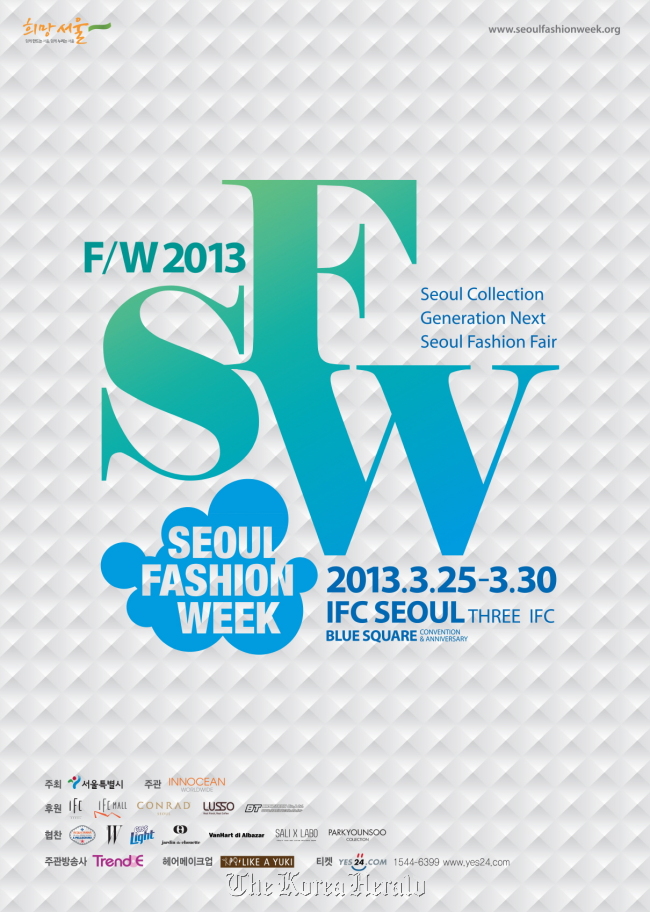 Organized by the Seoul Metropolitan Government, the fashion week is expected to attract more attention from the public as it will be held in IFC Seoul, a multi entertainment complex and one of the largest shopping malls in Korea. The other official venue is the Blue Square Theater in Hannam-dong.

“Korean fashion is broadening its presence in the world and has attracted more attention from the global audience. The fashion week will be a great opportunity to introduce Korean fashion and designers,” said Baek Un-seok, director of cultural industry at Seoul Metropolitan Government.

Famous fashion figures are also expected to drop by, including Nicola Formichetti, creative director of the French brand Thierry Mugler and stylist for Lady Gaga; executive director of the Council of Fashion Designers of America Fern Mallis; and president of the Federation of Pret-a-Porter Jean-Pierre Mocho.

About 70 buyers of some of the leading stores and show rooms in Europe and Asia will visit Seoul, as well as more than 50 members of the foreign press from 13 countries.

More side events are planned alongside the main fashion shows.

The Seoul Fashion Fair will attract customers and buyers with a wide selections of clothes and accessories from about 70 brands.

Charity event “Donation Runway” will be held on March 29 at IFC Mall with the proceeds from sales of designers’ clothes and accessories going to Save the Children.