Chun Young-woo, senior presidential secretary for security and foreign affairs, said Thursday that the government had never considered the redeployment.

“It is not a matter to be reviewed,” he told the U.S.-funded broadcaster Voice of America.

“I am doubtful that our nuclear armament or the redeployment of tactical nukes would help South Korea’s defense against North Korea’s nuclear weapons, or would help denuclearize the North.” 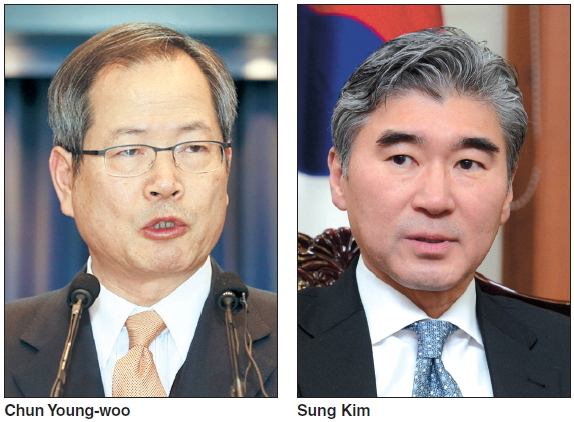 A day earlier, Sung Kim, U.S. ambassador to Seoul, said the proposed reintroduction would be a “huge mistake” at a forum with key Korean businesspeople.

Kim stressed that the allies, instead, needed to maintain the strongest possible combined deterrent capability so that Pyongyang would not be tempted to attack the South.

Since the North carried out its third nuclear test at its northeastern Punggye-ri site on Feb. 12, calls have resurfaced for South Korea’s nuclear armament.

Many Korean citizens have expressed anxiety, calling on the government to shore up its defenses to deal with North Korea’s increasing military threats.

More than 60 percent of South Koreans have security concerns following the North’s third nuclear test, according to a recent survey by the local private think tank Asan Institute for Policy Studies.

In the category of “social threats,” the North’s nuclear test came first with 39.9 percent, followed by felonies with 34 percent and serious illnesses such as cancer with 12.8 percent. The survey was conducted on 1,000 adults from Feb. 16 for two days.

Arguments that Seoul needs a nuclear deterrent have been put forward by conservative politicians here.

Rep. Chung Mong-joon of the Saenuri Party has long called for South Korea’s nuclear armament, stressing, “Seoul can no longer deal with a neighboring rogue state armed with a machine gun, when it only has a stone.”

Military strategists said Seoul should seek the “balance of nuclear power” with its own nuclear arms.

But some experts said the disadvantages of bringing nuclear weapons to the South would outweigh the advantages. They cautioned that Seoul could face strong resistance from the U.S. as well as the entire international community, which has long upheld the non-proliferation principle for world peace.

Bruce Bennett, a senior defense analyst at the RAND Corporation, expressed concern that South Korea’s nuclear armament could spark a regional arms race and lead to a security dilemma and, in the worst case, a “misjudgment” that could trigger armed conflicts.

“If South Korea gets them (nuclear arms) and Japan gets them, I think there could be an arms race with China, and the problem in arms races, which goes back to Soviet and U.S experiences, is the only way you could justify to your people that you ought to spend all the money that you are spending on these weapons, is saying how bad the opponent is,” he said in an interview with The Korea Herald.

“Well, that could become what we could call a self-fulfilling prophecy. China’s really bad, well okay, and well eventually, you might make a mistake and shoot at it. Or somebody may misinterpret a launch, and come up with a wrong conclusion.”

The military expert also stressed the risks of redeploying tactical nuclear arms to the peninsula.

“The problem is if you put a technical nuke in Korea, no matter where you put it, it becomes North Korea’s No.1 target ... Which of your communities wants to become a No.1 nuclear target?” he said.