With the U.S. presidential election on a knife-edge ...How will the outcome affect Korea? 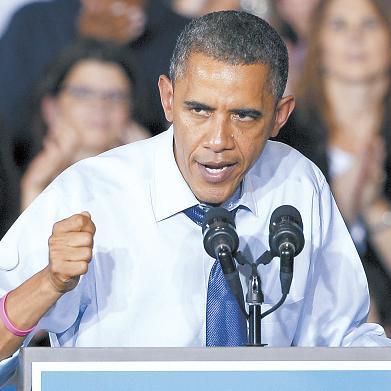 Billed as the choice to select the world’s most powerful man, the race for the White House captures the world’s attention like no other election. South Korea, whose relations with the U.S. are among the closest it has with any nation, has a particular interest in the outcome of the race.

One major foreign policy challenge for an Obama or Romney administration will be North Korea and related coordination with Seoul. Despite exchanging bitter attacks on the campaign trail, the two men differ little in their stated objectives for the peninsula. Both support the status quo of U.S. troops in South Korea and working toward the denuclearization of the North.

“Either presidential candidate, if elected, would continue to prioritize North Korean denuclearization as the main agenda item for relations with North Korea; however, the need to coordinate with South Korea may require a more flexible approach from the U.S.,” said Scott Synder, director of the program on U.S.-Korea policy at the U.S.-based Council on Foreign Relations.

Where differences could emerge, however, is in the degree of pragmatism of the respective candidates, according to Synder.

“In my view, President Obama’s approach already has a built-in capacity for flexibility because he has also prioritized coordination with allies as a foundation of his approach toward North Korea. However, he will not completely sacrifice denuclearization as an objective. This will potentially introduce tension in U.S.-ROK relations as South Korea attempts to reengage with the North, but it should be manageable.”

In the eyes of many Republicans, however, Obama’s “pragmatism” is a synonym for weakness. Romney has attacked the president for agreeing in March to a food aid deal with Pyongyang in exchange for a halt of its weapons programs. The deal fell apart just weeks later when the regime launched a missile in defiance of the agreement. John Lee, the former chairman and a current member of U.S. Republicans Abroad Korea, said that a Romney presidency would be more consistent in its approach to North Korean nuclear disarmament.

“The Republicans will give humanitarian aid,” said Lee. “But they do not believe in tactical concessions. They believe North Korea is consistent in their way of doing it and whatever their tactics they employ are temporary, malleable, not (toward) giving up their nuclear power or their missile regime.”

Romney has pledged a tough approach to North Korea, vowing to break what he has called a long cycle of indulging bad behavior. In contrast, all three main candidates for the Korean presidency have pledged greater engagement with the North. Some observers point out that tough rhetoric on the campaign trail does not always translate into similar action once in office.

Ahn Se-hyun, the chair of the department of international relations at University of Seoul, said that the George W. Bush administration had used similar rhetoric to the former Massachusetts governor before adopting a more pragmatic stance on Pyongyang.

“That was the same under the Bush era. I mean that Bush took initially took a tough stance yet transformed the policy. I am quite certain that Romney will take the same path unless he is foolish (enough) to cause any conflict in the region,” said Ahn.

From naming North Korea part of an “axis of evil” including Iran and Iraq early on in his presidency, Bush removed the country from the U.S.’ list of sponsors of terrorism in 2008, much to the disapproval of foreign policy hawks such as former U.S. Ambassador to the U.N. John Bolton. On the other side of the aisle, the administration of former President Bill Clinton formulated a never-executed plan to bomb North Korea’s nuclear facilities in 1994.

Snyder noted that the comments most relevant to North Korea made by Romney in the final presidential debate were to do with promoting freedom around the world. But, he said, much of Romney’s foreign policy would depend on the composition of his advisers.

“Romney is unlikely in my view to prioritize the North Korean human rights issue in the same way that Bush did, but some of his potential advisers may still push a tough approach on North Korean human rights,” he said. “Ultimately, the direction of a Romney administration is likely to depend on personnel selections, whether running battles between neocon and moderate conservative advisers continue, and whether Romney feels compelled to choose pragmatism or ideology as characteristics of his foreign policy team.”

Ahn is among those who believe Obama’s reelection would be more agreeable to Korea’s interest, pointing to greatly improved Korea-U.S. ties under his administration so far. An opinion poll released by the U.S.-based German Marshall Fund and the Asan Institute for Policy Studies in October showed that public support for the Korea-U.S. alliance was twice as high as a decade ago, with 80-90 percent of respondents in favor.

“There is no doubt that Obama presidency would be much better, considering that the U.S.-ROK alliance has been the strongest ever under Obama administration,” said Ahn.

“ROK-U.S. relations were even much enhanced compared to U.S.-Japanese relations. Obama clearly showed his much interest and affection toward Korea during his term. Korea’s global prestige clearly benefited from the enhanced relations between Lee and Obama.”

A representative of Democrats Abroad Korea failed to respond to questions from The Korea Herald in time for publication.

While there is practically no question that the next president will be anyone other than Obama or Romney, they are not the only ones seeking the office. Third party candidates include the Libertarian Party’s Gary Johnson, the Green Party’s Jill Stein, The Constitution Party’s Virgil Goode and the Socialist Party USA’s Stewart Alexander.

Of these, Johnson, a former governor of New Mexico, polls highest, having reached 6 percent in some national polls, relatively high within the U.S.’ rigid two-party system.

George Whitfield, the organizer of the Seoul Libertarian Party Meetup Group and a candidate for presidential elector in Florida, said that Johnson, as the only candidate serious about addressing the U.S.’ $16 trillion federal debt, would also be the best choice for Korea. Johnson proposes a 43 percent cut in federal spending in his first year, as well as eliminating most taxes and ending military engagements overseas.

“Gary Johnson would be the best U.S. President for the United States and thus indirectly benefit Korea. This is because the USA is now on course so that in the next few years its federal government will default either by not paying its creditors and not fulfilling its obligations or by the drastic devaluing of the U.S. dollar by massive inflation of the money supply by the Federal Reserve,” said Whitfield.

Such a scenario, he said, would spell disaster for Korean exporters.

In order to get along with the current policies of South Korea, existing President Barack Obama should be elected again in the forthcoming U.S. presidential election. Unlike other presidents of the U.S. during the last few decades, Obama has implemented many Asian-related policies on the basis of mutual interests. Otherwise, it could be time consuming between the two countries to make it sure every policy is in tune again.

No question that Mitt Romney would be better than Barack Obama for Korea.

Look back to when N. Korea launched a rocket last year, which fortunately failed. If Romney is U.S. president, North Korea could not even think about carrying out such a threatening act toward South Korea and other nations. Obama is an antiwar person and too soft on terrorist groups including North Korea.

The weaker one ― Obama. But the U.S. Presidential elections are about helping and supporting Americans first, so let’s all hope Romney wins. Enough incompetence and weakness from Obama.

The better U.S. president is the one who cares more about the peaceful reunification of Korea.

The one with a vision, and the one with a pragmatic, ideology-free approach. So certainly not Romney. Furthermore, the former governor is surrounded by people who proved how much damage they could do in foreign policy (17 of his 24 advisers worked for Bush-Cheney).