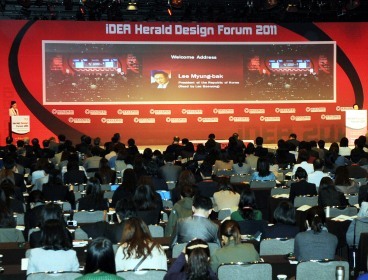 The iDEA Herald Design Forum, committed to shaping and discussing new ideas in the competitive field of industrial design, wrapped up on Thursday before an enthusiastic audience at the Shilla Seoul.

More than 1,000 people showed up in a conference hall that houses a little over 400, with many sitting on the sidelines and makeshift seats to get a glimpse of some of the world’s most celebrated gurus in design and branding.

The iDEA Herald Design Forum opened on Wednesday for a two-day run to cover a wide gamut of topics from city and corporate design to environmentally-friendly styling and the impact innovative designs have on contemporary culture.

The discussions were animated, and the panelists offered surprisingly realistic advice ― considering that some speakers refused to prepare their speeches in advance to sound as creative and spontaneous as possible ― on how to re-invent corporate and national images.

Simon Anholt, a member of the U.K. Government’s Public Diplomacy Board who now freelances as a branding expert, said Korea was showing significant progress in national branding after realizing that branding is not about trying to force people to buy its new self-image, but rather about walking the walk to show the world it is willing and has changed.

“You can’t change the image of a country with slogans,” he said.

Karim Rashid, internationally-renowned industrial designer, said he would like to see more companies ― including those in Korea ― live up to their potential.

“Companies really have to focus on taking ownership of their brand and what I mean by that is that they can’t become anymore somewhat generic, you can’t really be a follower you really have to find that niche, and that niche is really your sense of brand or identity,” Rashid said.

He stressed that the “why” is the most important question a designer should ask, after which concepts are weeded through. The designer also has to put their heart into the design and believe in it, then finally see it as the fully completed product.

During the city design session, experts debated over new ideas for improving cities, saying that even in this area, it’s all about moving away from the notion of “hard cities” to “soft cities,” which reflects a global trend putting more emphasis on software, as opposed to hardware.

Seoul City has been aspiring to re-invent itself as a city for design, and experts said it needs to become a city focusing on the actual people who live in it to expose them to a more playful, creative, yet efficient habitat.