As a workaholic attorney, Borah never had time to cook. If it was not from a restaurant or in a microwavable container, he was not eating it.

Now in his 50s and a judge with the Illinois Human Rights Commission, Borah laments the opportunities he has missed to gather family and friends because he does not know a thing about preparing a meal.

“I can’t invite people over unless it’s for beer and chips,” said Borah, who lives in Calumet City, Illinois “I remember the smells of homemade food growing up, and I’ve lost out on all of that.”

Borah is among the 11 percent of Americans who rarely or never cook at home, according to a 2010 Harris poll, and last spring he was among several hundred Chicagoans who auditioned for the Food Network’s “Worst Cooks in America” in hopes of changing that.

“Worst Cooks,” which premieres its second season Jan. 2, pits 16 clueless cooks against one another in cooking boot camp for a chance at $25,000 and culinary redemption.

The hopefuls auditioning for the show, arranged in a long line and each gripping a dish representative of his or her pitiful cooking (Borah brought a microwaved TV dinner), said they wished to learn to cook because it is healthier, less expensive, good for family ― or they were tired of the shame. They had varied reasons for never having learned before. 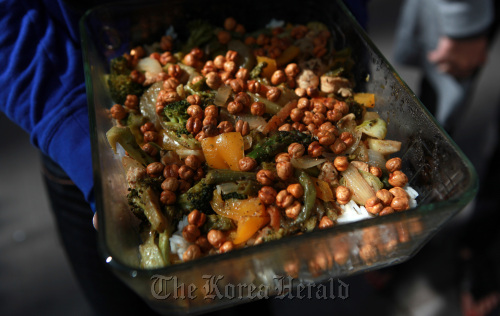 Stephanie Smith, 21, said she grew up on fast food because her mom did not cook, so she never had a good example.

“We would go to school and trade in our McDonald’s for other kids’ PB&J,” recalled Smith, of Mount Greenwood, Illinois “We were excited to eat green beans.”

Billi Suttles, 27, said she was blessed with such good cooks in her family that she never felt the need to learn herself, until now that she has three kids and a fianc.

“Some things I make too salty; I don’t know how to drain the grease off of meatloaf,” said Suttles, who lives on Chicago’s South Side. “When I do cook, I usually find it later in the trash.”

And then there are those who lack natural talent.

“I don’t think that part of my brain exists,” said Jamie Redichs, 29, of the West Loop neighborhood, whose featured dish was a plate of saltines with yellow mustard and bologna. Even following recipes can be a bust because they assume she knows more than she does.

“I was completely unaware that if a dish calls for rice, you have to actually cook the rice before you put it in the oven,” Redichs said. “And they should tell you that you have to wash a potato before you bake it.”)

In the end, three Chicago-area residents made it onto the show: Anthony Joseph Scinto, a 32-year-old mechanical engineer from Crestwood, Illinois, whose audition lasagna was compared to “baby puke”; Erika Rumsey, a 27-year-old account manager from Elgin, Illinois, who said eating out all the time had fattened her once-model figure; and Georg Coleman, a 39-year-old speech-language pathologist from Chicago who had to be told by the exasperated hosts that burnt food is not caramelized.

Coleman, who did not think she was a bad cook until her wife nominated her for the show, said the hosts also warned that her limited cooking repertoire was hindering her toddler’s nutritional foundation.

“That hit me hard,” Coleman said.

“Worst Cooks” co-host Robert Irvine, who also hosts the Food Network show “Dinner: Impossible,” said he was struck that so many contestants did not even know what real food looked like.

“Years and years ago, people grew up cooking with their families, but the world has become such a busy place that we don’t do that anymore,” said Irvine, who learned to cook in the Royal Navy. “It’s much easier to get something frozen from the supermarket.”

The biggest fear all 16 contestants shared, Irvine said, was timing: How do you make everything come together at once, and how do you know when it is cooked?

For their first challenge, contestants were taught how to cut a whole chicken, how to listen for the sizzle of oil to know the pan is hot and how to cut all vegetables the same size so they cook evenly. Some overcooked, over spiced, under sauced and started fires ― but some, with those basic skills, made passable chicken cacciatore and airline chicken.

Ultimately, these hapless cooks were not hopeless. By the end of the season, Irvine said, they were making restaurant-quality, three-course meals ― and at least one could consider a culinary career.

“One of them, I said if you ever decide to change jobs, come work with me,” Irvine said.